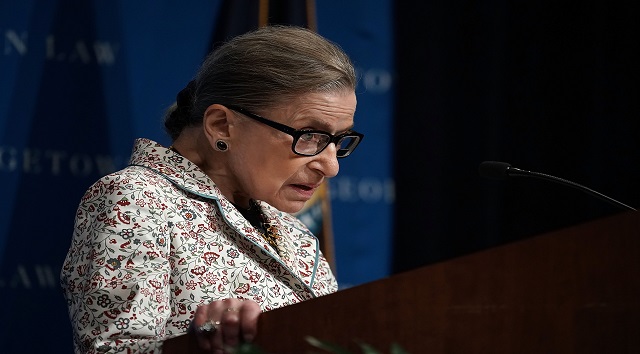 Alex Wong/Getty Images(WASHINGTON) — The #MeToo movement has a supporter in the nation's highest ranking court.
Supreme Court Justice Ruth Bader Ginsburg said she is "really turned on by the #MeToo" movement.
The comments came Wednesday when Ginsburg spoke at an event hosted by Georgetown Law school on the eve of Christine Blasey Ford testifying about her allegations of sexual assault during Judge Brett Kavanaugh's confirmation hearing.
Kavanaugh, who was nominated by President Donald Trump, has denied the allegations.
Georgetown Law posted the video of Ginsburg's talk to first-year law students on their Facebook page.
Ginsburg, 85, said: "These #MeToo complaints, every woman of my vintage has not just one story but many stories, but we thought there's nothing you can do about it, boys will be boys, so just find a way to get out of it."
"#MeToo was also an example of women coming together in numbers and so it was one complaint and then one after another the complaints mounted," she said. "Women nowadays are not silent about bad behavior."
Ginsburg cited another famous female jurist, former Supreme Court Justice Sandra Day O'Connor, calling for women to work together more moving forward.
"What Justice O'Connor said, she said women have to get out there and do things that make an impressive show. The more women that are out there doing things, the more women will be encouraged to do things, and we will all be better off for it, men, women and children," Ginsburg said.