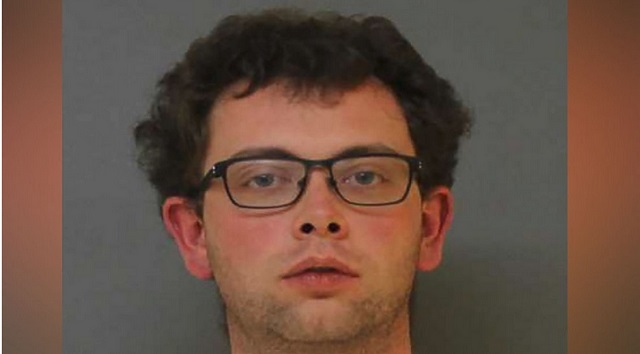 Simsbury Police Department(SIMSBURY, Conn.) — Authorities released a gut-wrenching video on Wednesday that shows a Connecticut man entering a police department lobby and confessing to a brutal murder.
William Leverett was accompanied by three members of his church last week when he turned himself over to police in Northern Connecticut and confessed to the 2014 stabbing death of insurance exec Melissa Millan, authorities said.
Leverett, 27, allegedly walked in and said: "I'm here to turn myself in for the murder on Iron Horse Boulevard almost 4 years ago," according to authorities. He also admitted to stabbing 54-year-old Millan on Nov. 20, 2014, on a jogging trail, police said.
Officials at the Simsbury Police Department, located just outside of Hartford, released video taken from the station’s lobby, showing Leverett and members of the Open Gate Ministries speaking with an officer on the morning of Sept. 19.
Leverett seems to walk in calmly but he appears to turn anxious after speaking with an officer near the station's entrance.
He speaks with the officer for about 20 seconds, takes a seat and begins to embrace a woman and the two men accompanying him. The officer walks away and reappears about five minutes later to shake the suspect's hand and usher him away.
Leverett allegedly told police that he didn’t know Millan but approached her because he was attracted to her "physical features," according to an arrest warrant affidavit.
Leverett said he got upset at some point and his "anger escalated,” according to the affidavit.
Investigators said he told them that Millan was "way out of my league" and "the next thing he knew he had stabbed her in the chest," according to the affidavit.
Open Gate Ministries pastor Michael Trazinski told ABC News that he was with Leverett when he turned himself in. Leverett had spoken about the crime previously at the church, he said.
"We were stunned," Trazinski said Monday. "We knew what we had to do. Justice needed to be done."
Trazinski's wife and Open Gate Ministries co-pastor, Colette Trazinksi, described Leverett as a “very helpful” and “faithful member of the church.”
Leverett was arraigned on murder charges on Monday. He’s scheduled to return to court on Oct. 9, authorities said.