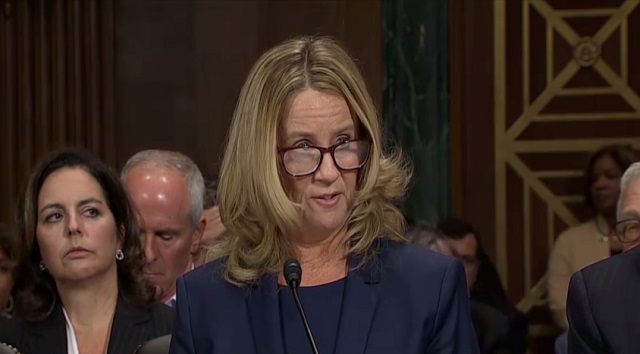 ABC News(WASHINGTON) — For almost nine hours Thursday, Judge Brett Kavanaugh and professor Christine Blasey Ford faced, at times pointed, questions from the Senate Judiciary Committee.
The stakes were high: a lifetime appointment to the swing seat on the Supreme Court. And with just 40 days until the 2018 midterm elections, Democrats and Republicans in Congress know that Americans will be watching.
In the time since Ford's story was made public, two other women have also come forward with allegations. Kavanaugh has swiftly and repeatedly denied the allegations.
Follow along with ABC News how the dramatic day unfolded:
6:46 p.m.: Trump weighs in

Just as the hearing concluded, the president fired off a tweet.

6:45 p.m.: Hearing adjourns
Chairman Charles Grassley announces the hearing is adjourned close to four hours after Kavanaugh began testifying.
6:40 p.m.: Kavanaugh says he didn't watch Ford's testimony
In an exchange with California Democrat Sen. Kamala Harris, Kavanaugh said he didn't watch Ford's testimony earlier in the day. He said he planned to, but was instead preparing his own.
6:30 p.m.: Cruz empathizes with Kavanaugh
Sitting behind Kavanaugh in the front row, his mother, father and wife all appeared to be moved to tears when Texas Republican Sen. Ted Cruz described watching the judge’s mother’s “pained face” as her son’s character was “dragged through the mud.”
Cruz, who also has two daughters, said he also empathized with Kavanaugh as a father.
“I know as a father, there's been nothing more painful to you than talking to your daughters and explaining these attacks that the media is airing,” he said.
“I also believe, though, that the American people are a fair-minded people, that the American people can set aside the partisan warfare of Washington and look to substance and facts,” Cruz said.

6:12 p.m.: Sen. Hirono presses Kavanaugh on "credibility, character, and candor" after recess
Sen. Hirono pressed Kavanaugh on "credibility, character, and candor" after a brief recess and asked him if he thought he embodied those traits.
He said he felt that he did.
She is one of six senators remaining slated to ask questions for five minutes each.
5:30 p.m.: Kavanaugh apologizes to Klobuchar
Kavanaugh came back into the room after a brief recess and opened with an apology for questioning Klobuchar’s drinking habits in a heated exchange.
Asked if he was ready to begin, Kavanaugh said this:
“I was going to say, I started my last colloquy by saying to Senator Klobuchar how much I respect her and respected what she did at the last hearing, and she asked me a question at the end that I responded to by asking her a question. I'm sorry I did that. This is a tough process. I'm sorry about that.”
Klobuchar responded that she appreciated his apology. “I would like to add when you have a parent that's an alcoholic, you're pretty careful about drinking,” she said.
5:08 p.m.: Kavanaugh flips question on Klobuchar, asks her if she has a drinking problem
Klobuchar, a senator from Minnesota and former lawyer, asked Kavanaugh about drinking, blacking out and whether he had foggy memories that would cloud his ability to tell the truth. Kavanaugh asked her about her own experiences.
Here’s the exchange.
Klobuchar: “You're saying there's never been a case where you drank so much that you didn't remember what happened the night before or part of what happened?”
Kavanaugh: “If you're asking about blackout. I don't know — have you?”
Klobuchar: “Could you answer the question, judge? … so, that's not happened, is that your answer?”
Kavanaugh: “Yeah, and I'm curious if you have.”
Klobuchar: “I have no drinking problem, judge.”
Kavanaugh: “Nor do I.”
Klobuchar: "Okay. Thank you.”
4:55 p.m.: Questions wade back into the contents of Kavanaugh’s yearbook
Sen. Sheldon Whitehouse, a Democrat, asked Kavanaugh questions about his high school yearbook that prompted some miffed reactions from the judge.
Whitehouse asked Kavanaugh about a phrase written in the back of his yearbook, “Ralph,” and whether it referred to alcohol.
“I like beer,” Kavanaugh said. “I don't know if you do. Do you like beer, senator, or not? What do you like to drink? Senator, what do you think like to drink?”
Next, Whitehouse asked about another phrase. “Buffed or boofed, how do you pronounce that?” he asked.
“That refers to flatulence. We were 16,” Kavanaugh said to laughter in the room.
“If we want to talk about flatulence at age 16 on a yearbook page, I'm game,” Kavanaugh later added.

4:48 p.m.: Graham's fierce defense of Kavanaugh
In one of the most emotionally charged moments of the hearing thus far, Sen. Graham took his opportunity to question to stridently criticize what he characterized as craven partisan politics aimed at destroying Kavanaugh's character in an effort to hold open the Supreme Court seat until 2020.
Graham told his Republican colleagues that if they vote no on Kavanaugh, they’re “legitimizing the most despicable thing I’ve seen in politics.”
To Democrats, he had a challenge:
“You want this seat? I hope you never get it,” he said.
“If you wanted an FBI investigation, you could have come to us. What you want to do is destroy this guy's life, hold this seat open and hope you win in 2020. You said that, not me,” he said.
Then, he turned to Kavanaugh.
“You've got nothing to apologize for,” he said.

1:36 p.m.: The hearing continues
The hearing is now back from recess, and first up to resume questioning is Democratic Sen. Mazie Hirono.
The Hawaiian senator called the hearing “a moment for our country.”
Prior to the hearing, Hirono was a vocal critic of the Republican committee leadership for procedural decisions regarding Ford's claims.
“I would like to have us come together and figure out what is the best way to proceed,” she said. “Not this seat of the pants stuff, and the latest being a letter from the chairman to the Democrats saying we have done everything we can to contact her—that is such bullshit I can hardly stand it.”
Before sitting back down for the rest of Ford’s questioning, Feinstein told ABC News’ Ali Rogin that seeing Ford now sheds light on the way this alleged incident has impacted her life for the past 30 years.
“I think she’s 100 percent credible and believable, and when you look at her as she how she must have been when she was 15, you see the enormity of what happened to her,” Feinstein said.
1:31 p.m.: The hearing watched around the country
Americans are watching.
Glued to their TVs, laptops and phone screens as the watch Ford’s testimony and the ongoing hearing, some Americans are watching on planes, some from classrooms, and others in conference rooms. Here is a look at audiences from across the country.