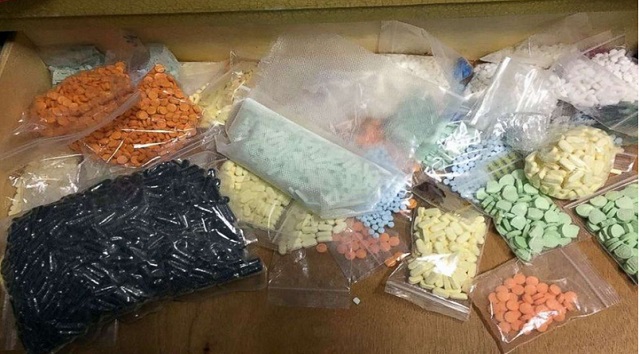 Drug Enforcement Agency(XINGTAI, China) — In February of 2016, the body of a woman named Catherine Brady was found in the bedroom of her home in Kissimmee, Florida. Brady had died of a fentanyl overdose, and several tablets that later tested positive for fentanyl were found next to her. Fentanyl is a powerful synthetic opioid that is up to 50 times more powerful than heroin.
Brady’s boyfriend, 36-year-old Eric Falkowski, came under suspicion when police discovered a small bag of fentanyl in his pocket. During a search of the home Brady and Falkowski shared, police uncovered a sophisticated counterfeit pill-making operation inside the garage, complete with bags of counterfeit prescription pills, large quantities of raw fentanyl powder, a pill press and prescription pill dies.
“He bought his pill press off of Amazon,” Falkowski’s attorney David Komisar told ABC News. “He would buy counterfeit pill dies that would mimic the look of a Percocet off of eBay.”
eBay told ABC News they stopped selling prescription pills dies a few months ago. Pill presses are still sold by Amazon, which the company says can have other, legitimate uses.
Falkowski was also able to buy a three thousand dollar “V” mixer on the internet that he used to mix together pill binder, acetaminophen and raw fentanyl powder to create counterfeit Percocet pills.
“He felt like he had a relatively safe formula that would mimic the effect of a Percocet,” said Komisar.
As for the raw fentanyl powder, Komisar said his client was able to easily find a website willing to sell fentanyl online.
“He did the research on the internet and discovered that he could literally go online and find fentanyl from China,” said Komisar. “They were in a U.S. postal service box. They were packaged and sent directly to his home.”
Like Falkowski, authorities says counterfeit pill makers all around the country are going online and receiving their supplies of fentanyl via U.S. mail from China. Chinese fentanyl is coming into the U.S. through ports of entry like John F. Kennedy’s International Mail Facility.
“We are getting the majority of fentanyl from China and Hong Kong,” JFK U.S. Customs and Border Protection Assistant Chief Kim Ciccolella told ABC News.
CBP officers at JFK airport have seized 234 packages containing fentanyl so far this year, according to Ciccolella — a staggering jump from 86 packages seized in 2017.
Fentanyl for sale online
When "20/20" went online to inquire about purchasing fentanyl, we found numerous Chinese websites willing to sell to us, no questions asked. We were quoted prices ranging from $1,200 to $1,600 for 250 grams of raw fentanyl — enough to make thousands of counterfeit pills.
ABC News correspondent Bob Woodruff was even able to speak directly via Skype to a representative of one of the sites, a woman who called herself “Lucy.” Lucy sent Woodruff video of what she said was raw fentanyl powder made by her company’s factory. She said the product was “guaranteed” to make it through customs, sending us photos of the vacuum sealed foil packages she said the fentanyl would be mailed in.
Many of the online vendors contacted by ABC News claimed to operate in the area around the city of Wuhan, a hub of Chinese chemical manufacturing. Woodruff traveled to the Wuhan addresses listed on the company’s websites, but his search turned up empty, and he found no fentanyl labs at the locations. In fact, U.S. authorities say that most of the Chinese labs selling fentanyl illegally are clandestine, underground operations, like the run-down facility raided by the Chinese police last November in the city of Xingtai, where 21 suspects were arrested.
Searching for answers from the Chinese government
To find out what the Chinese government is doing to crack down on the illicit fentanyl trade, 20/20 arranged an interview with Yu Haibin of the Ministry of Public Security's Narcotics Control Bureau. Yu downplayed China’s role in the U.S. fentanyl crisis, instead blaming skyrocketing demand among Americans for the problem.
“I want to stress that as far as I know, it’s impossible for fentanyl that’s produced legally here to be exported to the U.S.,” said Yu in a translated interview. “So it must be done by criminals using underground processing plants and the internet.”
When we asked Yu about our dealings with “Lucy,” who was willing to send fentanyl to us in the United States, he said that, “Cyber crime is a challenge to every nation,” adding “If there are banned substances that violate the law, we’ll conduct criminal investigations.”
Meanwhile, Lucy told us her company has no plans to stop selling illegal fentanyl to the U.S. According to Lucy, “It’s now very risky to sell illegal drugs in China, so we sell them overseas.”
As for Florida counterfeit pill maker Eric Falkowski, he was arrested and convicted of illegal drug distribution. His counterfeit Percocet pills were implicated in a rash of overdoses in Tennessee that Rutherford County EMS says led to the deaths of three people, including 33-year-old Tiffanie Scott. Falkowski is scheduled to be sentenced next month and is facing a prison term of 20 years to life.
While Scott’s family is grateful that Falkowski is behind bars, they believe fentanyl overdoses will only continue in the U.S. unless illicit fentanyl flowing in from China is stopped.
“The more they allow this to come into the country, this ingredient fentanyl, it’s going to lead to more deaths,” said Scott’s father, Rickey Helton.