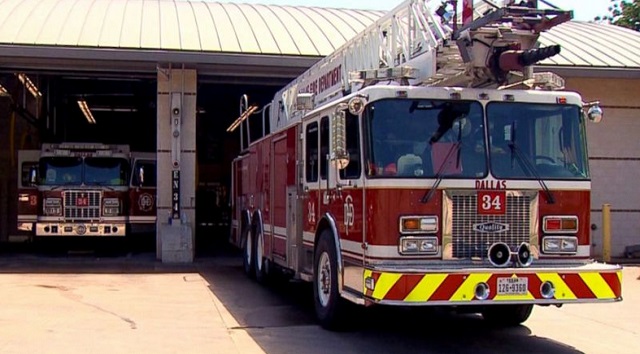 WFAA(DALLAS) — When Dallas firefighters arrived on the scene of a dispute in a home near Fairpark on Sunday night, there were residents outside yelling that there had been a shooting involving two victims, according to the Dallas Fire-Rescue Department.
One of the victims died later that night.
A dozen firefighters responded to the call about an active shooter around 7 p.m., but when they arrived, they found themselves in a potentially dangerous situation because the police had not yet arrived, Jason L. Evans, public information officer for the Dallas Fire-Rescue told ABC News.
“There was one male victim, who had been pulled into a neighbor’s home, as well as a female victim, who was still inside the home where the shooting actually occurred,” Evans told ABC News, adding that neighbors informed the firefighters of the situation.
“Firefighters made entry into the neighbor’s home, prior to the arrival of police, to help the male victim,” Evans said. “However, not knowing if the shooter was still in the residence where the shooting occurred, they staged outside until police arrived and cleared the house."
Inside, police found the female, Delashon Jefferson, 21, who was eight months pregnant, and the suspect, Lagarius Donnell Rainey.
Both Jefferson and the other victim, Daveron Sanders, had sustained gunshot wounds, and Jefferson died later on, according to a statement from the Dallas Police Department.
“Dallas Fire-Rescue responded and transported the victims to an area hospital," police said in a statement. "The doctors saved the baby and then the victim died of her injuries.”
Rainey was arrested on Sunday and transported to the Dallas County Jail where he is charged with murder and being held on $350,000 bond.
Rainey's lawyer, Doug Schopmeyer, did not immediately respond to ABC News' request for comment.
The confrontation began as a verbal dispute between Rainey and Jefferson, where he accused her of infidelity, according to an affidavit where he admits that it became physical and that he started punching her.
Soon after, "family members forced themselves into the bedroom of the victim, attempted to stop the assault and the suspect began shooting in their direction,” the statement said.
Firefighters could not immediately enter the residence due to a directive instituted last year that dictated firefighters could not enter potential scenes of violence without having police officers present, Evans said.
"They chose to [stage outside] because they knew that somebody was in there who needed help,” Jim Mcdade, president of the Dallas Fire Fighters Association told ABC News.
Mcdade said that the directive was written to protect firefighters from getting hurt.
“They could make a difference and they truly made a difference,” he said.“Firefighters risk their lives on every single run.”
Copyright © 2018, ABC Radio. All rights reserved.