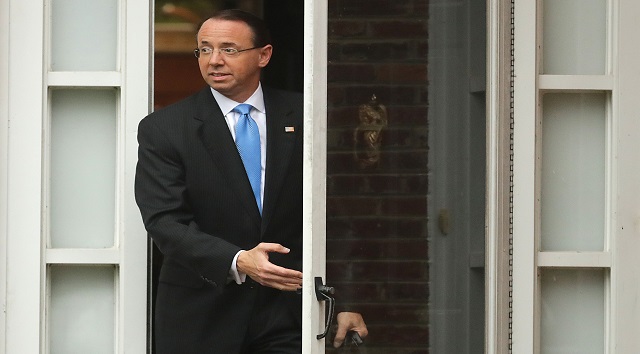 Chip Somedevilla/Getty Images(WASHINGTON) — Justice Department officials aren't quite sure what to make of Thursday's possible meeting between President Donald Trump and Deputy Attorney General Rod Rosenstein.
The president said Wednesday he might postpone the meeting so it doesn't distract from the Senate Judiciary Committee's high-stakes hearing at which his Supreme Court nominee, Brett Kavanaugh, and the woman who's accused him of sexual assault, Christine Blasey Ford, will speak.
If the White House meeting does happen, by the end of the day, Justice Department officials may have a new boss. Or they may not. After all, Rosenstein was expecting to be fired Monday when Chief of Staff John Kelly called him on the carpet to explain himself to the president, who spoke with him during the meeting by phone from New York.
This time, the call to the Oval Office "is an opportunity for Rosenstein to stand up for the department and what it stands for," one longtime career official within the Justice Department told ABC News on the condition of anonymity because the official was not authorized to speak to the news media.
"Everybody realizes he is in a tight spot where anything he says could mean he’s out of a job," the official said about Rosenstein, but "the president's attacks on the Department have not been aggressively rejected."
But another longtime Justice Department official, speaking on the condition of anonymity for the same reason, said the meeting "isn't about that" and should be focused on the recent allegations raised against Rosenstein, particularly reports claiming that last year he raised the prospect of secretly recording the president and even using the 25th Amendment to oust him from office.
"Rod is accused of doing something that I think was taken out of context," the second official said. "That's what this should be about."
Trump and Rosenstein should use the opportunity to "understand man-to-man" what happened, the official added.
On Wednesday, Trump told reporters that, despite widespread speculation he would do so, he "would certainly prefer not" to fire Rosenstein.
“We've had a good talk," Trump said. "He said he has a lot of respect for me, and he was very nice."
As for what decision he might ultimately make, all Trump would say was: "We'll see."
Last week, the New York Times first reported that in two separate meetings on the same day last year, Rosenstein raised the idea of using a wire to securely record Trump. The meetings occurred on May 16, 2017, a week after Trump fired James Comey as FBI Director and a day before Rosenstein appointed Robert Mueller as special counsel to investigate Russian meddling in the 2016 election.
Then-acting FBI Director Andrew McCabe attended both meetings, and he authored notes memorializing the conversations, including Rosenstein's references to using a wire against Trump and a reference to potentially employing the 25th Amendment to take Trump out of office, according to sources familiar with the notes.
Then-FBI attorney Lisa Page also attended the second meeting that day, and her notes also reflected that Rosenstein raised the specter of secretly recording Trump.
Some in the room left the second meeting believing that Rosenstein was joking about the wire idea, but McCabe and Page left the room thinking otherwise, according to the sources.
However, another source who attended the meeting with Page, McCabe and Rosenstein said the Justice Department officials there believed that Rosenstein was being "sarcastic" — noting that there was never any follow-up conversation from Rosenstein or anyone else about it.
This source said the meeting was essentially just a discussion about the events the week before and everything facing DOJ in the wake of Comey's firing.
"It was a difficult time for [the DOJ and FBI]," the source said. "Nobody was angry or acting out" in the meeting, but "it was just sort of intense. It was a very intense time."
The source said Rosenstein's bringing up the wire "was a comment borne out of frustration.” It was "a throw-away, sarcastic line that was perhaps in some way a challenge to" the FBI's view of investigating a president. “No one from Justice took it in the least bit seriously," the source said of Rosenstein's wire comment.
From the Justice officials' perspective, Rosenstein's comment was "a recognition to the people involved in this thing: How would you go about this investigation?”
Nevertheless, this source said it was unclear even to those in the meeting how McCabe interpreted Rosenstein's comment.
"I don’t know what Andy thought. He keeps his cards close," the source said.
In a statement on Friday, Rosenstein insisted he "never pursued or authorized recording the President and any suggestion that I have ever advocated for the removal of the President is absolutely false." However, Rosenstein did not deny initially raising such matters.
Trump, meanwhile, used the Friday news to once again attack the Justice Department and FBI.
"Look what's being exposed at the Department of Justice and the FBI," the president said at a rally in Springfield, Missouri. "You have some real bad ones. You see what's happening at the FBI — they're all gone, they're all gone. But there's a lingering stench and we’re going to get rid of that, too."
One of the longtime Justice Department officials who spoke to ABC News on Wednesday said Rosenstein should make clear to the president that the Justice Department can't be used to advance Trump's political interests.
“And if he hears anything that's counter to that, then do the right thing” and resign immediately, the official said of Rosenstein.
Copyright © 2018, ABC Radio. All rights reserved.