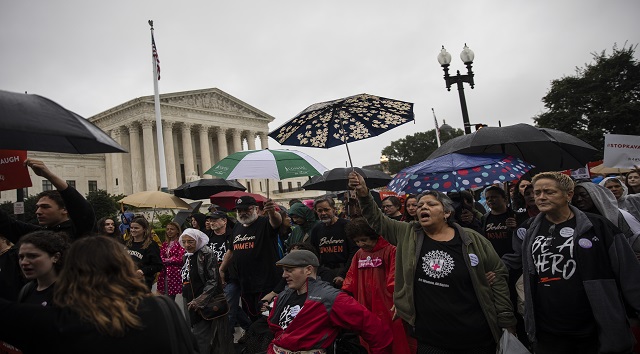 Drew Angerer/Getty Images(WASHINGTON) — Nearly three weeks ago, Supreme Court nominee Brett Kavanaugh first took a seat before a panel of senators, fielded hours of questions and attempted to secure enough votes to be confirmed to the highest court in the land.
Now, Kavanaugh returns, this time for a public hearing on allegations from California professor Christine Blasey Ford, who sent a letter months ago to her senator, ranking member of the Judiciary Committee and Democrat Diane Feinstein of California, detailing a high school party at which she has accused Kavanaugh of sexually assaulted her.
According to written testimony released a day before the hearing, Ford plans to tell the committee she's not there because she wants to be, but that she feels compelled to be.
"I am here today not because I want to be. I am terrified. I am here because I believe it is my civic duty to tell you what happened to me while Brett Kavanaugh and I were in high school," she wrote in her anticipated opening statement.
The hearing, scheduled to begin at 10 a.m., will kick off with statements from Chairman Chuck Grassley, the Republican senator from Iowa, and Feinstein.
Separately, Ford and Kavanaugh each will give opening statements and then field an hour and 45 minutes of questioning from the committee, which will alternate between Republicans and Democrats. The Republicans will likely yield their time to their outside counsel, Arizona attorney and former sex crimes prosecutor Rachel Mitchell.
Ford and Kavanaugh will not be in the room for one another's testimony, and sources close to Kavanaugh told ABC News the judge will watch from Vice President Mike Pence's office in the Senate chamber.
In the time since Ford's story was made public, two other women have also come forward with allegations. Senators likely will ask the judge about their stories as well.
On Sunday, former Yale University classmate Deborah Ramirez publicly shared in the New Yorker that when they both were freshmen at Yale University, Kavanaugh exposed himself to her at a drunken dorm party and "thrust his penis in her face."
On Wednesday, Julie Swetnick, a resident of Washington, D.C., came forward and claimed to have directly witnessed sexual misconduct by Kavanaugh during his high school years, she wrote in a sworn declaration provided to the committee and released on Twitter by attorney Michael Avenatti, who also represents porn star Stormy Daniels.
According to the declaration, Swetnick allegedly observed Kavanaugh at more than 10 house parties in the early 1980s. She said at numerous parties Kavanaugh was drunk and engaging in what she called "highly inappropriate conduct," including "fondling and grabbing of girls without their consent."
Kavanaugh has repeatedly denied each allegation, most publicly in an interview on Fox News Monday night.
"America is about fairness — hearing from both sides," Kavanaugh said, sitting next to his wife, Ashley. "I didn't do this or anything resembling this. This is wrong."
"Yes, people might have had too many beers on occasion. In high school, I think all of us have done things we look back on in high school and cringe a bit," he said. "But that's not what we're talking about. We're talking about an allegation of sexual assault, and I never sexually assaulted anyone."
Kavanaugh plans to stand behind this denial and re-emphasize his commitment to the process in his prepared opening statement to the committee.
"This effort to destroy my good name will not drive me out," the judge wrote in the statement released before Thursday's hearings.