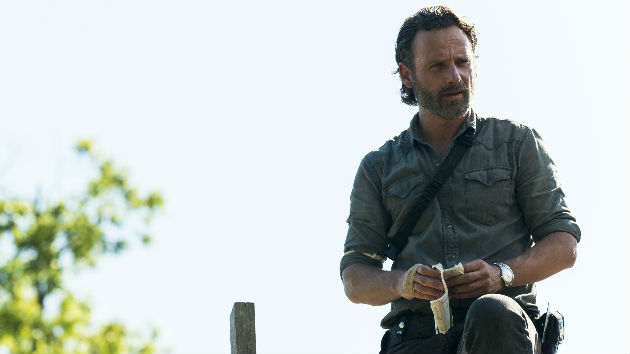 AMC/Gene Page(ATLANTA) — With the start of the ninth season of The Walking Dead only a little more than a week away, fans are getting ready to say goodbye to Rick Grimes: As has been reported, this season is star Andrew Lincoln's last.

Although ending his run was difficult for Lincoln, the British actor says his eventual exit was discussed years ago.

"I had a conversation during season four with [executive producer] Scott Gimple about this," Lincoln tells Entertainment Weekly. "We spoke about it and said, 'There’s got to be a shape. We need a shape to work out if we get to season five then maybe we've got a couple more.' There were all these ifs and buts and strategies. And I said, 'eight sounds like a good number.'"

However, it was last year's San Diego Comic Con that convinced Lincoln to stay on for one more season.
"I realized that rather than have the funeral, I had to prepare for the funeral and I had to make sure everybody was comfortable with the funeral arrangements. And I don’t think I was ready for the funeral! You know what I mean? I was like, I don’t think I’m ready to go yet!"
Lincoln's ready now, however. But that doesn't mean his time with the show is over: he says he'll return to the hit show's Atlanta set for season ten, to direct his TV "family."

The Walking Dead's ninth season kicks off Sunday, October 7 at 9 p.m. on AMC.