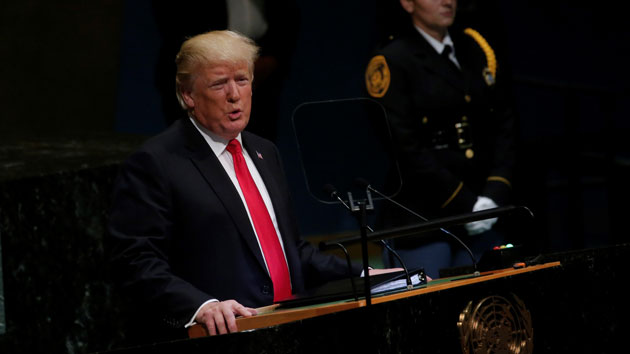 Mohammed Elshamy/Anadolu Agency/Getty Images(NEW YORK) — President Donald Trump on Wednesday opened his United Nations Security Council speech by taking a shot at China, claiming that it's trying to meddle in the upcoming midterm elections.
"Regrettably we found that China has been attempting to interfere in our upcoming 2018 election, coming up in November," Trump said.
He went on, "They do not want me or us to win because I am the first president ever to challenge China on trade and we are winning on trade. We are winning on every level. We don't want them to meddle or interfere in our upcoming elections."
Trump's comment on election interference was somewhat surprising given that the Security Council meeting tends to focus on nuclear proliferation.
Trump then pivoted to the threats posed by nuclear and chemical weapons and he touted his administration's "bold action" on the issue, saying officials are confronting these "sinister threats."
Trump said the world has been "rightly focused on the dangers of nuclear weapons" but he urged leaders to "never forget the threats posed by biological and weapons."
He specifically mentioned Russia and Iran as being connected to the continuing violence in Syria before reiterating the need for U.S. sanctions on Iran.
"The Syrian regime's butchery is enabled by Russia and Iran," Trump said. "The Iranian regime exports violence, terror and turmoil. It illicitly procures sensitive items to advance its ballistic missile program and proliferates these missiles all across the Middle East. The regime is the world's leading sponsor of terror and and fuels conflict across the region and far beyond. A regime with this track record must never be allowed to possess a nuclear weapon."
Trump made his displeasure with Iran known in his Tuesday speech to the General Assembly as well, calling on "all nations to isolate Iran’s regime as long as its aggression continues" as part of a "maximum pressure" campaign meant to ultimately drive Iran back to the negotiating table to get a new, more comprehensive deal.