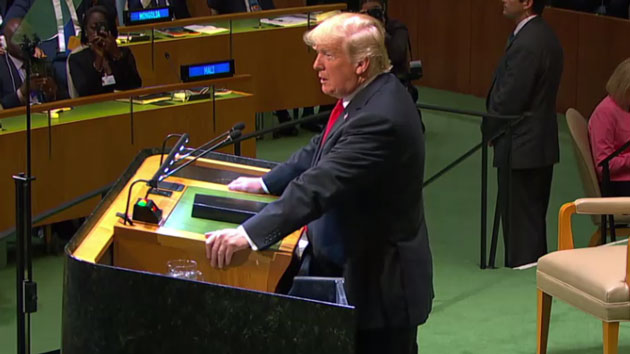 ABC News(NEW YORK) — President Donald Trump for the first time endorsed a two-state solution to the Israeli-Palestinian conflict, saying on Wednesday that he thought it was the best option for peace.
"I like a two-state solution," Trump said in response to a reporter's question about whether his administration's forthcoming peace plan would include such a scenario.
"That's what I think, that's what I think works best," he added. "I don't even have to speak to anybody."
Trump, who was at a meeting with Israeli Prime Minister Benjamin Netanyahu, gestured to Netanyahu, saying, "Now, you may have a different feeling, I don't think so. But I think two-state solution works best."
Trump's backing of a two-state solution — one state for Israelis and another for Palestinians — is the most explicit support his administration has given for the idea.
Trump had previously suggested he was open to different scenarios — including a one-state solution — depending on what Israelis and Palestinians agreed to. Support for a two-state solution to the conflict had been U.S. policy when Trump took office.
He has tasked his son-in-law and adviser Jared Kushner with working with parties in the Middle East to formulate a peace plan.
Trump said he would like to release that plan "over the next two to three to four months, something like that."