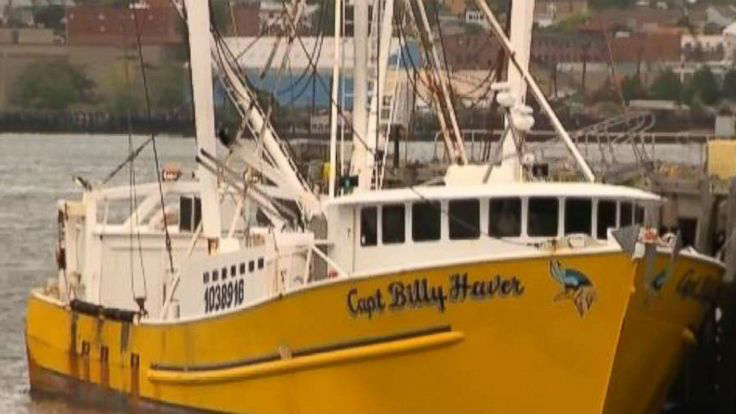 WCVB-TV(NANTUCKET, Mass.) — A fishing boat captain told members of the U.S. Coast Guard that a crew member went "crazy" when he allegedly stabbed multiple people on board, a mayday call for help reveals.
The call, released by the Coast Guard, begins as the Virginia-based fishing vessel, the "Captain Billy Haver," was about 60 miles off the coast of Nantucket, Massachusetts, on Sunday.
The captain asks if anyone can hear him multiple times before members of the Coast Guard answer, "Loud and clear," asking him whether he's "all right."
After about two minutes of trying to establish communication, the captain answers, "We have a man gone crazy here on the boat."
The captain then gives the Coast Guard his position before telling them that he doesn't know whether one of the victims is OK.
"We have one man … I don't know if he's dead or not," the captain says. "But, one of the crew members went crazy, and he started hitting people in the head with a hammer."
The captain then says that the man is on the rig and has "already cut the antenna or something off," expressing concerns for those on board.
"I got three men in danger right now," he said. "One, I cant wake him up."
The U.S. Attorney's Office in Massachusetts announced charges against undocumented immigrant Franklin Freddy Meave Vazquez, 27, in the attack.
Vazquez, who was in the country illegally from Mexico, allegedly got into a fight on the ship before stabbing three of his crew mates, according to charging documents filed Monday. Vazquez is being charged federally since the crime took place within the special maritime and territorial jurisdiction of the U.S.
One crew member who was attacked told authorities that a fellow shipmate was already lying on the deck badly bleeding when Vazquez allegedly attacked him, according to the U.S. Attorney's Office.
Vazquez, allegedly armed with a hammer in one hand and knife in the other, allegedly told the victim to "just stay there" before attacking him and a third person, court documents state.
The first two victims were treated by a doctor aboard a German cruise ship, which answered the fishing vessel's distress call. The doctor pronounced one of those victims dead, authorities said.
There were seven people total on board, authorities said. Vazquez climbed the ship's mast but was captured by other crew members, according to the U.S. Attorney's Office.
Vasquez was previously arrested in March and charged with abduction by force, intimidation, or deception and released on bond, federal authorities said.
Vasquez could face life in prison if he is convicted of murder. He will also be subject to deportation after serving any potential sentence.