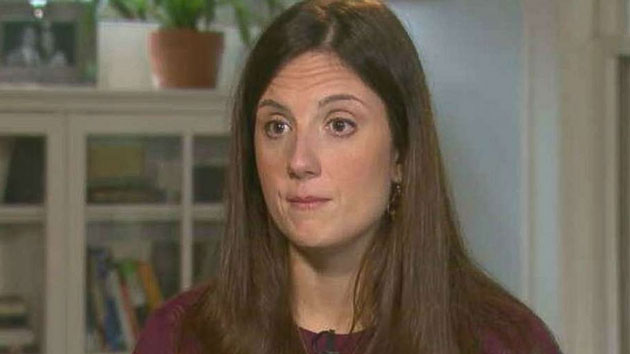 ABC News(CINCINNATI, Ohio) — A Kentucky mother of two is recovering after being wounded in a deadly bank shooting earlier this month, but she says the situation still feels unreal.
“I feel detached from it,” Whitney Austin told Good Morning America on Wednesday. “If I think about the victims … that's when I get emotional. I don’t have anything to be depressed about. I don't have any sorrow. … I survived.”
Austin, who lives in Louisville, Kentucky, spent five days at the University of Cincinnati Medical Center after a gunman opened fire inside the Fifth Third Bancorp headquarters on Sept. 6, wounding her and killing three others.
She was in town for a meeting at Fifth Third’s headquarters, where she works as a senior product manager, and walked into the lobby as the shooting was in progress.
The suspected gunman Omar Enrique Santa Perez was fatally shot by police.
“When I take myself back to that moment of squatting in the revolving door … I can't reconcile that I lived,” she said. “I have my kids. I get to go back to my life.
“I only have thanks and gratitude,” she added.
Perez, of Northbend, Ohio, allegedly opened fire in the building's loading dock before continuing into the lobby area, where Austin was wounded, police said.
One other person was injured and three others — Richard Newcomer, 64; Raj Kandepi, 25; and Luis Felipe Calderón, 48 — were killed. Police have not released a motive in the case.
Austin said she didn’t know the alleged shooter, but she thinks about him him often. She said the shooting has inspired her to become an activist and an advocated for better gun control.
“I feel sorry for him and sorry for his family,” she said. “I’m sorry that we didn't provide you the support necessary to not be in this position. We all have a lot of responsibility to take care of the mentally ill.”
Her husband, Waller Austin, told “GMA” that he also feels as if he’s recovering as well. He said he’s struggling to find a sense of closure someday, but the tragedy feels way too fresh.
“It's not healthy to sit here and think about what we could have done differently,” he said. “We have so much more to give and so much more life to live. Thinking about closure at this point is just, it's not happening.”
The Austins have received overwhelming love and support in the wake of the shooting, Whitney said, thanking her family, friends and all the strangers who have reached out.
“It’s been wonderful to open letters and have people pour out their heart and soul,” Whitney Austin said. “We've had a lot of support through social media and also lots of support from our local friends and family.”