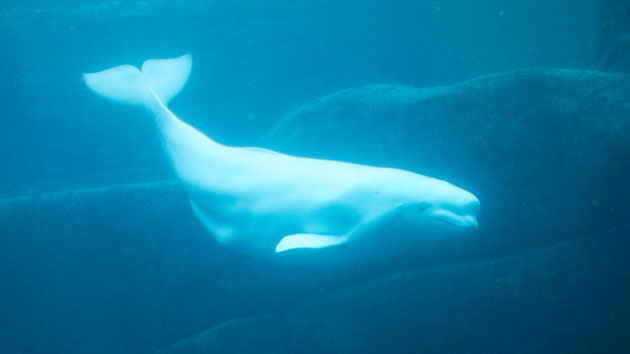 iStock/Thinkstock(LONDON) — A beluga whale has been spotted stranded in the River Thames in London.
The whale, nicknamed Benny, was first spotted on Tuesday by ecologist Dave Andrews, who posted a video of the mammal on Twitter, Sky News said.
Since then, hundreds of people, photographers and wildlife enthusiasts have gathered in Gravesend to watch Benny, hoping that he will soon find his way back out to sea.
"It’s exciting," Steven Ridd, 65, who drove half an hour to see Benny, told ABC News. "You’ll never see a whale on the Thames again."
Ridd is scheduled to go out on a paddle steamer on the River Thames tomorrow, which he hopes will allow him a closer look of Benny.
Also in the crowd were three generations of the Taylor-Jones family, along with their beloved Jack Russell terrier, fittingly named Russell.
Finbar Taylor-Jones, 13, had skipped school to join his father, Richard, and grandfather, Brian, to see Benny.
When asked if watching Benny was better than being in math class, Finbar Taylor-Jones said, "Yes, definitely."
However, scientists are concerned that Benny may not be able to find his way back to the Arctic sea, where Beluga whales usually live. Since he was first spotted yesterday, Benny has moved further into London and away from the sea.
Tanya Ferry told the BBC that plastic bags in the river could become an issue as the whale looks for food to survive.
Rescue teams from The British Divers Marine Life Rescue are on standby, according to The Daily Telegraph.
ABC News reached out for further comment to the British Divers and the Port of London Authority.