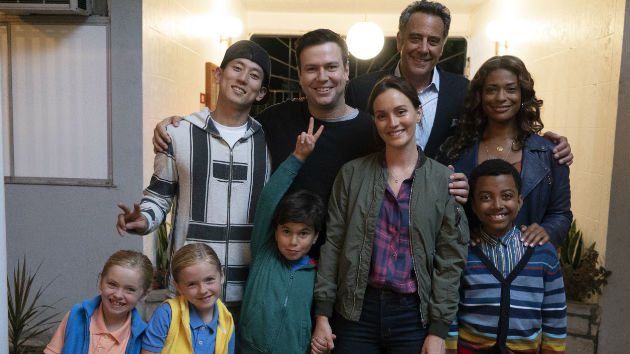 ABC/Richard Cartwright(LOS ANGELES) — Being a single parent is rarely glamorous, but ABC's new sitcom Single Parents is shining a light on the funny side of raising kids alone.

The ensemble cast stars Gossip Girl's Leighton Meester, Everybody Loves Raymond's Brad Garrett, Saturday Night Live's Taran Killam and more as single parents trying to raise kids, and shows how difficult — and funny — that can be.

Meester — who has one child with husband Adam Brody — told ABC Radio that she finds it hard enough raising kids with two parents, let alone just one.

"It's the hardest and obviously most rewarding and fulfilling thing, but it is so so hard," she said. "I think it's hard with money, help, and a husband, and my character has none of those things. You know, she's just sort of like a warrior doing it all, and it's hard."

Garrett, who plays an older man with two smaller children, said there could be some advantages to being the only parent though.

"Do it alone, so they can't go 'I'm going to mom.' 'No you're not! 'Cause I'm both. You're going nowhere. You're going here, or you're going to foster care,'" Garrett joked with ABC Radio.

He does, though, have a problem with older men becoming fathers.

"There's a lot of 58-year-olds, or 60, that have kids, and I look and I go why — it's very selfish, I'm sorry, to do that to a kid cause you know they want to play catch, and I'm uh, trying to get someone to help me with the stinky," Garrett said.

As COVID-19 relief vote nears, undocumented immigrants struggle with no aid
‘This has been a huge mental toll’: Working moms still struggle a year into the pandemic
Golden Globes 2021: ‘The Life Ahead’ takes home Golden Globe for Best Original Song
Andra Day and Lee Daniels discuss their “wonderfully collaborative” process making ‘The U.S. vs Billie Holiday’
Daniel Kaluuya says he “wasn’t invited” to the world premiere of ‘Get Out’
‘The Bachelor’ recap: Kit walks away as four other women eliminated ahead of hometown dates