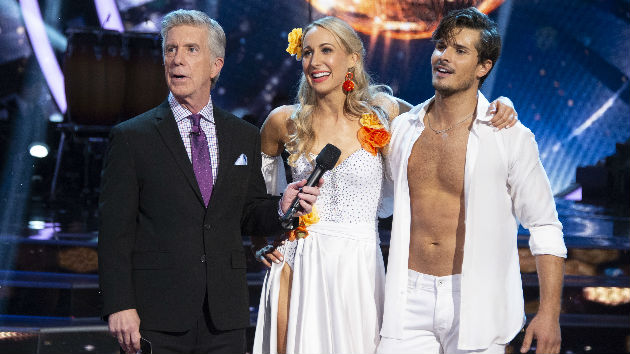 ABC/Eric McCandless(HOLLYWOOD) — On Tuesday night, comedian Nikki Glaser was the first contestant eliminated from the new season of ABC's Dancing with the Stars. She says she wasn't surprised that she got voted off, because she couldn't do what she's best at — being funny — while dancing.

"Comedians always go first or second, generally, and so I knew I was at risk, but I thought I was gonna be kept around 'cause I'm funny and I can bring that to the show," Nikki tells ABC Radio. "So I was really trying to just be myself in the moments that I got to talk — because that's the problem!"

She explains, "As a comedian, when your voice is taken from you and you just can communicate with your body, but you can't be funny with your body, 'cause there's nothing funny about doing a salsa! It's supposed to be sexy and in control and so I was completely out of my comfort zone, completely disabled with[out] the thing I'm good at."

Nikki also wants to underscore that she was not making a sex joke Tuesday night when Tom Bergeron asked her if being a comedian had prepared her for being judged. She answered by saying she'd had a lot of rejection and rough sets — as in stand-up comedy sets — but Tom made it sound like she'd said "rough sex."

"It was a good moment but I just wanna be very clear: I did not mean to say something that dirty on television and I did not mean it that way!" she laughs. "I meant that I bomb a lot in standup!"

Dancing with the Stars continues Monday night at 8 p.m. ET on ABC.