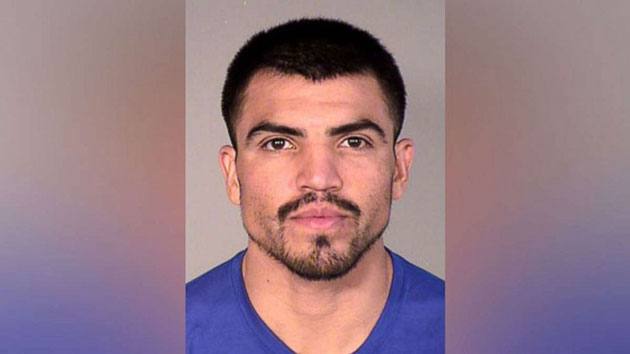 Oxnard Police Department(OXNARD, Calif.) — Boxer Victor Ortiz has been arrested on suspicion of sexually assaulting a woman in Southern California, according to police.
The 31-year-old was booked on charges of forcible rape, forcible oral copulation and forcible digital penetration, according to a press release issued by the Oxnard Police Department. Ortiz was subsequently booked on $100,000 bail. He has since been released.
Ortiz, who is also known for his appearance competing on "Dancing with the Stars," is the former WBC welterweight champion. He lost the belt in a fight against Floyd Mayweather in September 2011.
In March, a woman contacted authorities to inform them that she was sexually assaulted inside her home, police said. The alleged victim identified the suspect as Ortiz.
The case was later presented to the Ventura County District Attorney's office and a warrant was issued for Ortiz's arrest. He turned himself in to the Ventura County Sheriff's Department on Tuesday.
Ortiz's arrest comes just days before his nationally televised fight against John Molina Jr., presented by Premier Boxing Champions, airing on Sunday. It is unclear if the fight will go on as scheduled. ABC News has reached out to PBC for comment.
Molina shared a photo of himself with his daughters on Instagram, after Ortiz's arrest, saying, "My girls are ready to watch daddy shine and I'm ready to-do my job."
ABC News reached out to representatives for Ortiz for comment, but has yet to hear back.
Ortiz is scheduled to make a court appearance on Oct. 10.