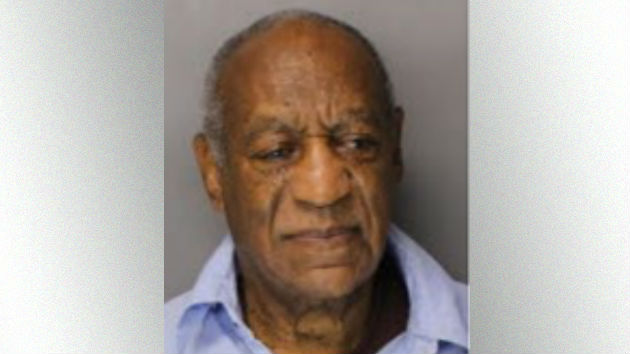 PA Dept of Corrections
Posted on September 26, 2018 by ABC News

The 81-year-old comic and entertainer, sentenced Tuesday to three to ten years in prison after being found guilty in April of three felony counts of aggravated indecent assault, is now incarcerated at the maximum security Pennsylvania State Correction Institution at Phoenix, or SCI Phoenix, located in Skippack Township.

A search of Cosby's name on the Pennsylvania Department of Corrections inmate locator website reveals Cosby's inmate photo. He's shown dressed in what appears to be a blue denim collared shirt. Rather than looking directly at the camera, Cosby's eyes are directed down and to the left. The photo was taken at 7:06 p.m. ET Tuesday.

Cosby's widely-circulated booking photo, taken Tuesday just after he was sentenced in Montgomery County Court and led away in handcuffs, shows him still clad in the white shirt and suspenders he wore to court — his tie off, tee-shirt exposed, his eyes again directed downward.

"Cosby is being housed in a single cell in a unit adjacent to the infirmary," declares a statement from the Pennsylvania Department of Corrections. "He will be allowed phone calls and visitation in accordance with policy, as well as opportunity to exercise during the classification process."

“We are taking all of the necessary precautions to ensure Mr. Cosby’s safety and general welfare in our institution,” said Corrections Secretary John Wetzel in the statement. “The long-term goal is for him to be placed in the general population to receive the programming required during his incarceration.”

SCI Phoenix is Pennsylvania's newest prison. According to the state website, it officially opened July 9 and is designed to hold 3,830 inmates, overseen by 1,200 full-time employees. If Cosby is looking to keep busy during his incarceration, the prison has a laundry, a garment factory and a shoe factory at which he can work. There are also adult education and vocational classes, a gym, and law and recreational libraries.

Judge Steven T. O'Neill denied bail for Cosby during sentencing, meaning Cosby will remain incarcerated while his attorneys work on his appeal.