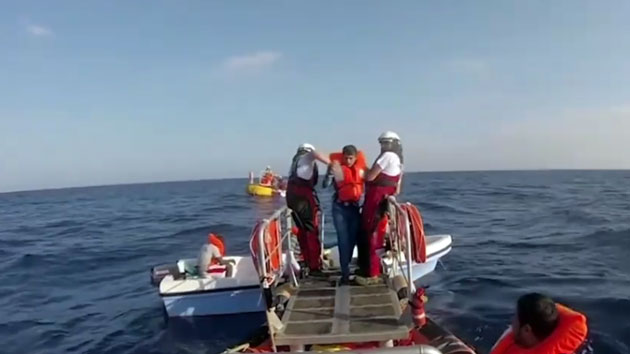 ABC News(MALTA) — Fifty-eight distressed survivors aboard a migrant rescue ship are heading to Malta before being taken to France, Germany, Spain and Portugal after a deal was struck to solve the latest humanitarian crises in the Mediterranean Sea.
“The 58 persons on board Aquarius 2 will be disembarked on a Maltese asset in international waters—the persons will be disembarked in Malta and all of them will leave the country to be immediately redistributed in another four European Union member states,” the Maltese government said in a statement Tuesday.
France will receive 18 of the migrants on board, Spain and Germany will welcome 15 each and 10 will be taken to Portugal, according to the French prime minister’s office.
The Aquarius 2 is the last private rescue vessel to search for shipwrecked migrants on the route from North and Sub-Saharan Africa to Italy, via Libya. The ship is operated jointly by SOS Mediterranee and Medecins Sans Frontieres (Doctors Without Borders).
“We have 58 survivors on board the ship; 17 of them are children and further 17 survivors are women” SOS Mediterranee spokeswoman Natalia Lambana told ABC News by phone.
The Maltese government said it wants the transfer to Malta to take place as soon as it is logistically possible. But Aloys Vimard, a member of Doctor Without Borders aboard Aquarius 2, told French radio France Info Wednesday that they “might have to wait two or three days before disembarking the migrants in Malta because weather conditions in the Mediterranean are currently deteriorating”.
After dropping the 58 survivors in Malta, the migrant rescue ship Aquarius 2 will head to the city of Marseille, the French prime minister announced. It will dock in the French city and try to find a new registration and rectify its stateless position in order to set sail again, following Panama’s decision to revoke the Aquarius’s registration earlier this week.
The rescue ship has been at the center of a diplomatic row the past few months in Europe after Italy’s decision to ban the vessel from its ports. Matteo Salvini, Italy’s anti-immigration interior minister, described the rescue vessels as a "taxi service" for migrants.
Since the beginning of the year, more than 1,250 people have drowned while attempting to cross the Central Mediterranean, according to Doctors Without Borders.

Authorities rescue five from truck trapped in flooded creek in Tennessee
Today is deadline to register for WPAL Winter Warrior powerlifting showdown
And Just Like That… Chris Noth hints Mr. Big could be heading to the ‘Sex and the City’ reboot
‘It was nothing short of a miracle’: Charter boat captain recounts rescue of man stranded 36 hours at sea
Another storm heading to snow-slammed South, vaccinations disrupted in Texas, Florida: Latest
Another storm heading to snow-slammed South: Latest forecast