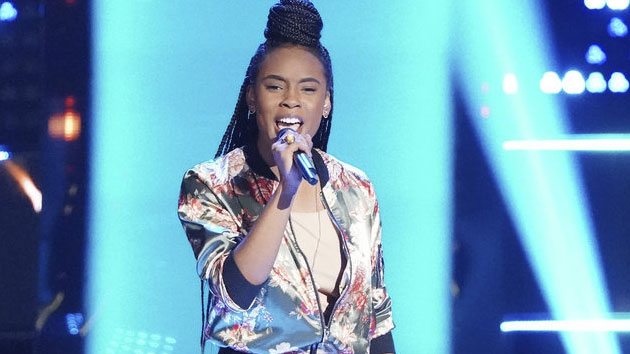 The absolute stand out of the night was 13-year-old Kennedy Holmes who had all four coaches turn their chairs after performing Adele's "Turning Tables." Adam said Kennedy "can become the biggest thing to ever come from this show," and Blake said she is the best vocalist to audition this year.

But after an impromptu duet with Jennifer, Kennedy finally chose the "I Am Changing" singer as her coach.

Iraq War veteran Mikele Buck also moved the judges with his country performance of Brooks & Dunn's "She Used to Be Mine." He performed the song in honor of his friend who took his life after returning from war. After a heated battle between Kelly and Blake for him, Mikele ultimately chose Kelly as his coach.

A 19-year-old Fililpino American from New Jersey named Radhaalso had the coaches in a heated battle. After performing "Mama Knows Best," Adam used his one block of the season to prevent Radha from choosing Jennifer as her coach. Ultimately, Radha chose Adam after he said "it's the era of the female."

Ayanna Joni, a 29-year-old mother and former child actor, became the first contestant in the series' history to come back after getting no coaches to turn their big red chairs. She will take part in this season's new segment: Comeback Stage where she will get a second chance to perform in the live shows after being coached by country artist Kelsea Ballerini.

Other contestants that took a stab at the blind auditions include:

Mercedes Ferreria-Dias, 17 years old, auditioned last season but no one turned around
Sang: "She Used to Be Mine"
Judges: Blake and Kelly turned; Mercedes chose Blake

Patrique Fortson, had a record deal as a child
Sang: "Get Here"
Judges: Jennifer and Adam turned; Patrique chose Jennifer

The blind auditions continue with a one-hour episode airing Tuesday night at 8 p.m. ET on NBC.