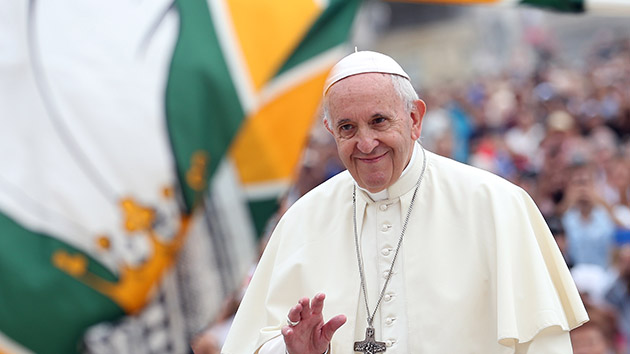 Franco Origlia/Getty Images(TALLINN, Estonia) — Pope Francis addressed the sex abuse scandals impacting the Catholic Church and the effect they have had on young people during a speech in Estonia Tuesday.
Francis acknowledged that some young people have been put off religion because they are "upset by sexual and economic scandals that do not meet with clear condemnation."
"We ourselves need to be converted; we have to realize that in order to stand by your side we need to change many situations that, in the end, put you off," Francis said.
"We know –- and you have told us –- that many young people do not turn to us for anything because they don’t feel we have anything meaningful to say to them," the pope said. "In fact, some of them expressly ask us to leave them alone, because they feel the Church’s presence as bothersome or even irritating."
"These are just a few of your complaints. We want to respond to them. As you yourselves put it, we want to be a 'transparent, welcoming, honest, inviting, communicative, accessible, joyful and interactive community,'" Francis continued.
The pope made the remarks on the final day of his four-day visit to the Baltic States. He spoke before an audience of young people from a number of Christian religions in a 19th century Lutheran Church in Tallinn, the capital of Estonia.
Earlier this month, the pope met with a small delegation of American Catholic Church leaders amid the sexual abuse crisis that's dominated the conversation about the U.S. church.
The meeting had been requested by Cardinal Daniel Di Nardo following the damaging release of a Pennsylvania grand jury report in July that stated that since 1947, hundreds of priests in the state sexually abused more than 1,000 children and the news that a now-demoted cardinal, Theodore McCarrick, rose through the ranks within the church, despite officials in the Vatican and in the U.S. knowing about sexual allegations against him dating back to 2000.
McCarrick was removed as a cardinal by Pope Francis in July after a church investigation found recent allegations believable. But, the case has continued to fuel criticism directed at the pope after a statement written by a high-ranking Italian Vatican official called for the Pope’s resignation over the mishandling of the McCarrick case.
Next month, the Vatican is hosting a synod, a gathering of several hundred bishops from around the world, to talk about young people and the church.
In preparation for the synod, the church asked young people between the ages of 16 and 29 from around the world to share their views about the church. Their completed questionnaires were used to prepare the meeting's working document, the church said. One of the working document's findings is that young people see a large disconnect between what the church says and what the church does. The synod will be held from Oct. 3 to Oct. 28.
On Tuesday evening, the pope concluded his trip to the Baltics with a large, open-air mass in Freedom Square in Tallinn. This trip included visits to Lithuania, Estonia and Latvia, which are celebrating their original, hundred-year anniversaries of independence from Russia following World War I in 1918. During World War II, they were occupied by the Nazis and then lived under Soviet rule for almost 50 years until 1990; hard times when people were persecuted for their faith.
Copyright © 2018, ABC Radio. All rights reserved.