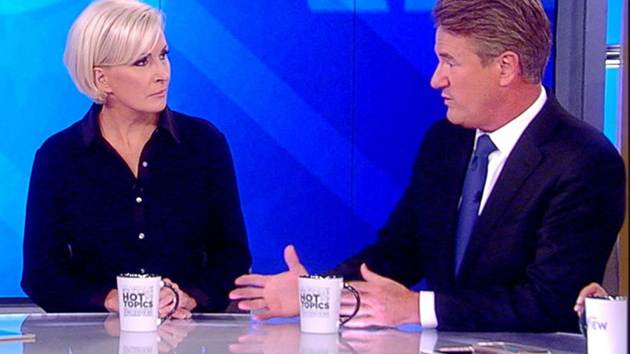 ABC News (NEW YORK) — On ABC's "The View" on Tuesday, Joe Scarborough and Mika Brzezinski, co-hosts of MSNBC’s “Morning Joe” weighed in on their discomfort over Supreme Court nominee Brett Kavanaugh’s responses to questions on race.
“When Kavanaugh was asked by Kamala Harris, do you believe someone can be barred from the United States of America by Congress for the president based solely on their race? He wouldn't answer the question,” Scarborough told the hosts of “The View" of the nominee's response to lawmakers during a recent hearing.
That lack of response, Scarborough said, was troubling.
“If you can't even say that we can't discriminate against people based on their race in 2018, you don't belong on the Supreme Court,” Scarborough said.
The panel's discussion about Trump's pick to join the highest court came just days before a highly-anticipated Senate Judiciary Committee hearing in which both Kavanaugh and Christine Blasey Ford, who accused him of sexual assault when they were suburban Maryland high schoolers decades ago, were set to testify.
Scarborough served as a member of Congress from 1995 to 2001 as a Republican representative of Florida. While in office, Scarborough was a member of the Judiciary, Government Reform and Oversight, among others.
Scarborough has previously criticized news coverage of Kavanagh’s allegations, which he said are biased against the Supreme Court nominee.
“What we’ve seen in the last week has made me want to call networks and put a 'D' in front of the name of the so-called journalists that have already decided that Brett Kavanaugh is a rapist,” Scarborough said recently on his show. “It’s sick.”
However, in the past, Scarborough on his show also complimented Kavanaugh’s experience and said that writing an article about exempting sitting presidents from “criminal prosecution and investigation” speaks to Kavanaugh’s character.
Brzezinski, his co-host, said on "The View" that Ford's allegation of sexual assault warrants an FBI investigation and that the White House and congressional Republicans should welcome such transparency given the stakes.
"I think there should be an FBI investigation. I think Republicans should call for it," she said. "I don’t know what they have to lose at this point except for, quite frankly, the women vote. "
Copyright © 2018, ABC Radio. All rights reserved.

Employers grapple with tough new question: Can they demand workers get a COVID-19 vaccine?
Biden will not have to cater to my agenda: Sen. Joe Manchin
‘Avengers: Endgame’ directors Joe and Anthony Russo happy to be clueless fans of ‘WandaVision’
‘Pharmacy deserts’ are new front in the race to vaccinate for COVID-19
Biden calls Texas decision to reopen ‘Neanderthal thinking’
Supreme Court wrestles with voting rights and race discrimination