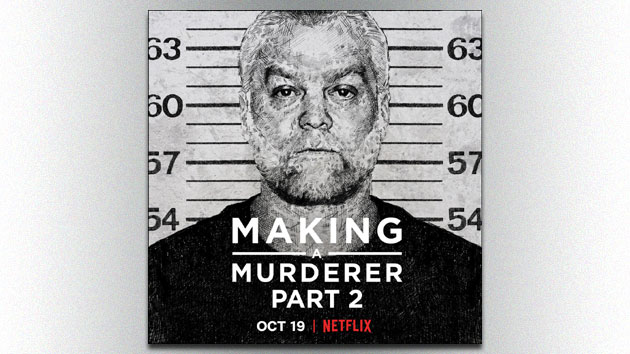 Netflix(NEW YORK) — If you couldn't get enough of Making a Murderer, here's news you've been waiting for. Season two of the Netflix documentary series debuts October 19.

Making a Murderer 2 picks up where the first season, which launched in 2015, left off — the controversial Wisconsin conviction and incarceration of Steven Avery and his nephew, Brendan Dassey, for the 2005 murder of Teresa Halbach. Avery had already been exonerated in 2003 in the sexual assault and attempted murder of another woman after serving 18 years in prison for it.

Making a Murderer Part 2 will take "an in-depth look at the high-stakes post-conviction process, exploring the emotional toll the process takes on all involved," according to Netflix.

The ten-episode first season of Making a Murderer debuted on Netflix in December 2015 and was both a commercial and critical hit.

Search underway for suspect in shooting of 2 deputies near Florida-Georgia border
Self-described neo-Nazi sentenced to 19 years for plot to blow up Colorado synagogue
The Terminator is back…in animated form for Netflix
Andra Day and Lee Daniels discuss their “wonderfully collaborative” process making ‘The U.S. vs Billie Holiday’
Secretary of State making his first ‘trips’ to Mexico and Canada — virtually
Eddie Murphy shares the hilarious “original script” ideas for ‘Coming 2 America’