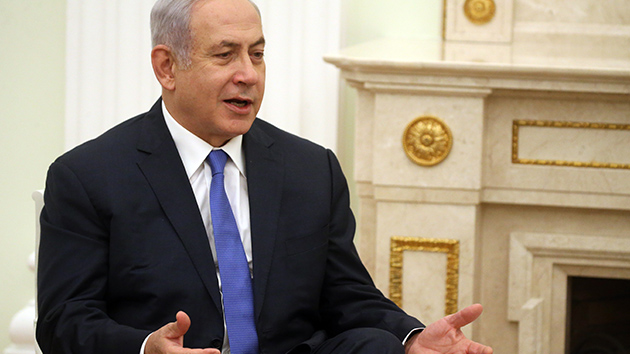 Mikhail Svetlov/Getty Images(NEW YORK) — High on the list of discussions that Israeli Prime Minister Benjamin Netanyahu is likely to have with President Donald Trump at this week's U.N. General Assembly in New York will be Israel's swiftly crumbling relationship with Russia.
The fallout stems over Russia's defense ministry’s accusing Israeli F-16 fighter jets of deliberately using a Russian military Il-20 reconnaissance plane for cover during a strike on Syrian targets last week. Syrian air defense missiles downed the Russian plane, killing all 15 service members on board.
In a direct response, Moscow has promised to deploy S-300 advanced antiaircraft weapons systems to its Syrian allies, which could potentially shut down the entire airspace to Israeli attack jets.
The S-300 is far more sophisticated than anything the Syrian regime has and it poses a far greater threat to attacking aircraft. In the words of Vladimir Ermakov, director of the department for nonproliferation and arms control of the Russian Foreign Ministry, the anti-air defense system would be able to close Syrian airspace "where necessary."
In Netanyahu's opinion, however, Syria and Iran are to blame. During a phone call with Russian President Vladimir Putin, Netanyahu reinforced Israel's position that Syrian missiles brought down the plane and that Iran is actively undermining stability in the region, according to the prime minister's office.
Growing Iranian influence in neighboring Syria is worrisome for Israel and it's why the Israelis embarked on a diplomatic wooing of Moscow, hoping to use their longstanding relationship as leverage.
Netanyahu's most recent visit with Putin to the Kremlin in July was the ninth time the two leaders have met since Russia entered the Syrian war in 2015. Netanyahu has met with Putin in the past three years more than with any other world leader, including presidents Obama and Trump.
Now that the Syrian regime has regained almost all the territory it lost to rebel forces, with only Idlib province still under rebel control and territories to the east in Kurdish hands, the conflict appears to be entering its final stages.
But tensions have mounted between Iran and Russia as priorities have shifted, and Israel has been seeking to capitalize on the schism.
Moscow is increasingly embracing a realpolitik approach to the Middle East, pursuing policies that would benefit Russia the most and re-examining its relationships with Israel, Iran, Turkey, Syria and the United States.
Russia and Iran share common geopolitical concerns about the United States, which could prove to be an unbreakable bond in the end. Furthermore, along with Turkey, Russia and Iran have all suffered under U.S. sanctions and mistrust the Trump administration.
The White House has begun pounding the anti-Iranian drumbeat ever louder and doubt over Israel's ability to conduct future strikes against Iran — and its proxy militia Hezbollah — in Syrian territory is likely to cause the Trump administration further anxiety.
A new report from bipartisan U.S. group the National Coalition to Prevent an Iranian Nuclear Weapon, made up of present congressmen and senators plus former U.S. diplomats, accuses the Trump White House of forcing Iran into a corner, creating a situation in which the regime is only left with two options: "capitulation or war."
Now that Mr. Trump has once again publicly berated Iran during his remarks at the United Nations, the regime in Tehran has little choice but to dig in its heels and refuse to consider loosening its grip on gains in Syria.
An obstinate Iran would put Israel in an even more disadvantageous position now that it has embroiled itself in a bitter argument with its friends in Moscow.
Copyright © 2018, ABC Radio. All rights reserved.