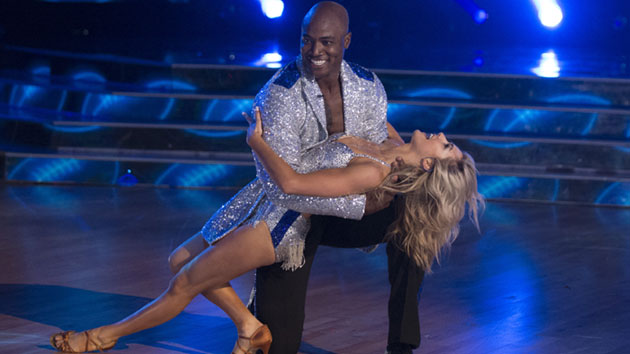 DeMarcus Ware and LindsayArnold; ABC/Eric McCandless(LOS ANGELES) — On the kickoff of the 27th season of Dancing with the Stars, an athlete and a singer tied for first place, while a Bachelor in Paradise contestant didn't get any roses from the judges.

The best dances of the night came from R&B star Tinashe, whose jive with new pro Brandon Armstrong scored a 23/30, and NFL star DeMarcus Ware, whose cha cha with Lindsay Arnold also earned a 23/30.

The worst dance came from "Grocery Store Joe" Amabile, an alumni of both The Bachelorette and Bachelor in Paradise. His quickstep with Bachelor super fan and pro Jenna Johnson was so pathetic that judge Len Goodman gave him a four, while Carrie Ann Inaba and Bruno Tonioli each gave him five, for a dismal score of 14/30.

Paralympic Alpine skier Danelle Umstead, the show's first blind contestant, wowed the judges by pulling off a foxtrot with partner Artem Chigvintsev and scored an 18/30.

The sexiest dance of the night came from Fuller House star Juan Pablo Di Pace who, along with partner Cheryl Burke, nearly set the dance floor on fire with a smokin' salsa.

The strangest dance of the night came from American Idol mentor, radio host, author and comedian Bobby Bones. After his jive with Sharna Burgess, he was so excited that he started yelling, fist-pumping and jumping up and down, until he fell on his butt on the ballroom floor. Bruno called their dance "exquisitely demented;" Tom Bergeron suggested that Bobby try decaf.

The DWTS two-night season premiere continues at 8 p.m. ET on ABC Tuesday, as the contestants dance again, and one couple goes home.