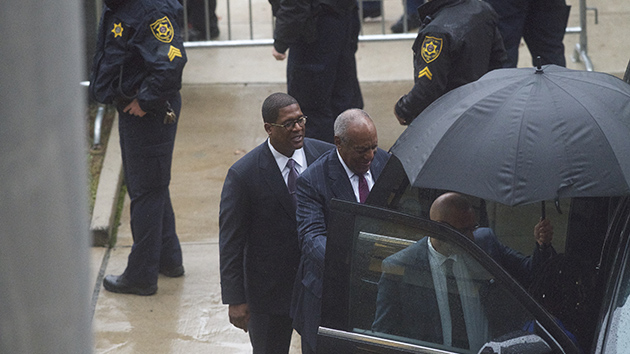 Mark Makela/Getty Images(NORRISTOWN, Pa.) — Bill Cosby was sentenced Tuesday to three to 10 years in prison by a Pennsylvania judge who had designated the comedian a "sexually violent predator."
Judge Steven O'Neill sentenced Cosby in a Norristown, Pennsylvania courtroom, capping a two-day hearing attended by about a dozen women who accused Cosby of sexual assault, including the Andrea Constand whom he was convicted of assaulting in his suburban Philadelphia home in 2004.
"This defendant is designated a sexually violent predator," O'Neill said from the bench before announcing Cosby's sentence.
O'Neill asked defense attorney Joseph Green whether Cosby wanted to make a statement before he is sentenced. Cosby declined.
Cosby appeared alert, cooperative and engaged earlier Tuesday morning as he answered series of questions from prosecutor M. Stuart Ryan designed to determine whether he fully comprehended the implications and consequences of the "sexually violent predator" designation.
Pennsylvania state law defines a person with such a designation has "a mental abnormality or personality disorder that makes the person likely to engage in predatory sexually violent offenses." The consequences of such a designation are severe and lifelong.
The designation also means that Cosby will be required by law to register as a sex offender for the rest of his life and be subject to the most stringent requirements a sex offender can incur.
At one point, Cosby interrupted Ryan with a question: "If I went from the city to another city … even if it's just overnight, do I have to get in touch with the state police?"
Ryan suggested Cosby seek the counsel of his attorneys.
Cosby's lawyers had pleaded with O'Neill Monday not to send the entertainer they described as an 81-year-old, infirmed blind man to prison but rather place him under house arrest.
But Montgomery County District Attorney Kevin Steele asked O'Neill to incarcerate Cosby with a maximum sentence, arguing Monday that saying "he's too old to go to prison is a get-out-of-jail-free card."
Cosby was convicted in April of drugging and molesting Andrea Constand, a former director of operations of women's basketball at Cosby's alma mater Temple University who once considered the comedian a mentor. The assault occurred in 2004 at Cosby's suburban Philadelphia home.
Constand told O'Neill Monday she wanted "justice as the court sees fit."

In a written statement to O'Neill, which was released just before the judge ruled on Cosby’s status, Constand wrote, "Bill Cosby took my beautiful, healthy young spirit and crushed it. He robbed me of my health and vitality, my open nature, and my trust in myself and others."