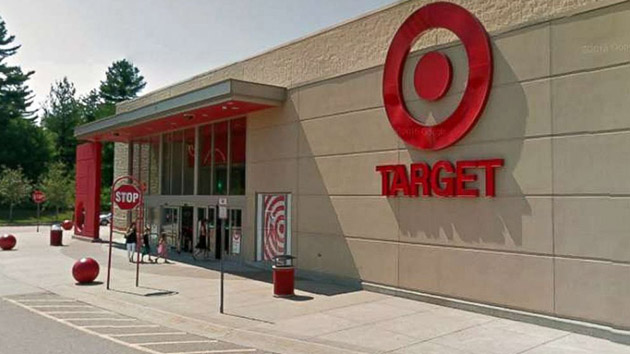 Google Maps (EASTON, Mass.) — A mother has been arrested for allegedly leaving her 1-year-old son in a shopping cart at a Target parking lot this weekend, police said.
A customer at an Easton, Massachusetts, Target reported that a baby was in the parking lot alone around 1 p.m. on Saturday, the Easton Police Department said.
When police arrived, they said the 17-month-old boy didn't appear to be hurt, but was evaluated by the fire department and then taken to a hospital to be checked.
The department received a call around 2 p.m. from a man who said he was with the boy's mother and she claimed the baby had been left behind accidentally, police said.
The mother, 27-year-old Taylor Perdue, told detectives that she and three friends went back to her car after they left Target and she "believed that one of her friends had secured her son in his rear-facing car seat," police said in a statement Monday.
Perdue said her friends left in a separate car and she then drove to Plymouth, about 33 miles from the Target. She "realized that her son was not in the car seat" when she arrived, police said.
Perdue, of Acton, Maine, was charged with abandonment and endangerment of a child, police said.
The Massachusetts Department of Children and Families launched an investigation and, in coordination with the Maine Department of Health and Human Services, returned custody of the child to Perdue later that evening, police said.
It is not clear when Perdue will appear in court or if she is represented by an attorney at this time.
A manager at the Easton Target store declined to comment on the incident.
Copyright © 2018, ABC Radio. All rights reserved.

Nurses save mom and newborn after she gives birth while intubated for COVID-19
Suspect arrested in ambush shooting of 2 LA sheriff’s deputies
Missing New Jersey man last seen on I-80 near Clarion
Four PA State Troopers earn the Governor’s Awards for Excellence
Shannen Doherty on her battle with stage 4 breast cancer: “I’ve got a lot of life in me”
Two deaths in Sandy Township, neither are a danger to the public