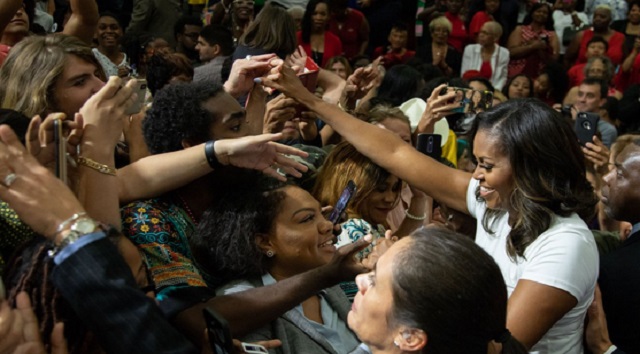 Twitter/@MichelleObama(LAS VEGAS) — Former first lady Michelle Obama said she hoped to get Nevada residents "fired up" on Sunday as she headlined her first rally for When We All Vote, the nonprofit voting initiative she launched over the summer.
More than 2,000 people crammed into the gymnasium of Chaparral High School in Las Vegas where Obama, along with several high-profile singers and actors, spoke on Sunday evening and reminded Nevada residents why their votes matter.
"When you don’t vote, that’s exactly what you’re doing — you’re letting other people make decisions for you," Obama said. “We get the leaders we vote for. We get the policies we vote for. And when we don't vote, that's when we wind up with government of, by and for other people.
“While some folks are frustrated and tuned out and staying home on Election Day, trust me, other folks are showing up. Democracy continues with or without you,” she added.
Obama also voiced her personal frustrations with the current political climate and called out “the nastiness of our politics.”
“Believe me, I am frustrated, too,” she said. “I am sick of all the chaos and the nastiness of our politics. It’s exhausting and, frankly, it’s depressing. I understand wanting to shut it all out.”
The event marked the beginning of When We All Vote’s "Week of Action," a multi-day effort to boost voter registration in major cities ahead of Election Day in November. Obama, the organization’s co-chair, is scheduled to headline a second rally in Miami on Friday.
The organization is nonpartisan, according to its website, and Obama signaled that she wanted everyone to vote, regardless of political affiliation.
“They’re finding all kinds of ways to keep you at home, hoping that when you hear about all those things, you’ll just give up,” she said. “Don’t let anybody intimidate you from being a part of this process.”
Obama drew loud rounds of applause whenever she mentioned her husband, former President Barack Obama, who hit the campaign trail over the summer to support Democrats.
Democrats would need to win at least 24 seats to gain a majority in the House, where at least 41 Republicans are planning to retire, resign or run for another office, according to an analysis by ABC News.
Control of one chamber on Capitol Hill would give Democrats the power to block the Republican agenda and use their majority power in the respective congressional oversight committee to launch investigations into the White House.
Other speakers at the rally included actresses Kelly McCreary and Lana Parrilla of ABC's "Once Upon a Time," Carolyn Swords, of the WNBA’s Las Vegas Aces, and comedian Keegan-Michael Key.
Obama and the organization thanked the attendees for "bringing the energy" in a post-rally tweet on Sunday and asked them to get their loved ones to vote.
"Thank you, Las Vegas! Now let’s get working to help our family and friends get registered to vote," Obama tweeted.