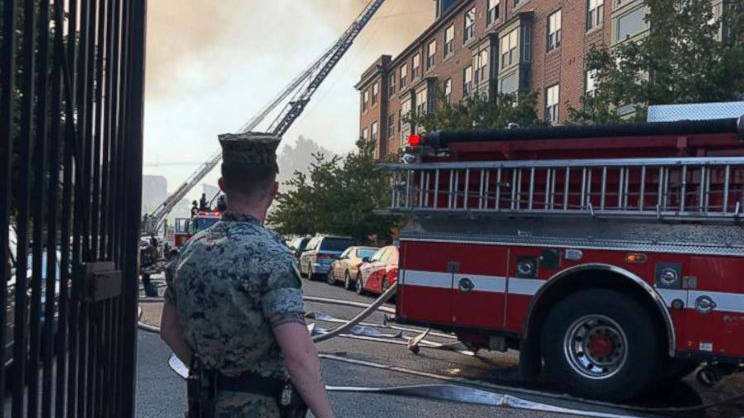 Cpl. Damon A. Mclean/Marine Corps.(WASHINGTON) — A 74-year-old man has been found alive in an apartment building in Washington, D.C., five days after it was nearly gutted by fire, officials said.
The senior citizen was found by crews that had been hired by the building's owners to evaluate the safety of the structure so that fire marshals could enter, D.C. Mayor Muriel Bowser said Monday at a news conference.
The man was taken to a local hospital with non-life-threatening injuries, she said.
The mayor said she believed he'd been in his apartment since the blaze last Wednesday. The man's identity has not been released.
"I can’t really tell you about his condition at this point except that he has non-life threatening injuries," Bowser said. "It appears that based on the report that I got from the building workers that he was sitting in his apartment. The workers helped him into a chair and out of the building and he is now being treated."
On Sept. 19, dozens of senior citizens had to be saved from the fire at the four-story Arthur Capper Senior Public Housing building. Video posted to social media showed flames shooting out of the top of the apartment building.
At the time, the fire chief said four people had been transported to local hospitals. The D.C. Fire and EMS chief later said the alarm system at the building did not work, according to ABC affiliate WJLA-TV.
Firefighters and several U.S. Marines were captured on video running toward the two-alarm blaze. Residents were taken to the Marine Barracks Washington Annex nearby, the Marines said in a statement posted to Facebook.
ABC News correspondent Kenneth Moton, who was at the scene, said "the entire neighborhood was filled with smoke for hours."
"From the moment they arrived on the scene and well into the next day, D.C. firefighters had a constant stream of water on what was left of the building," he said. "It was pretty much gutted. I could see several fire truck ladders in the air spraying water to prevent hot spots from flaring up."