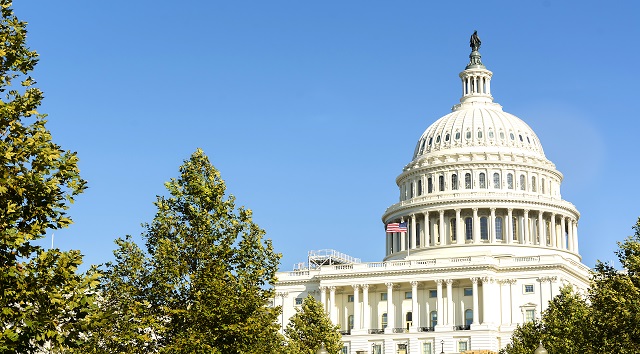 iStock/Thinkstock(WASHINGTON) — Congress returns to Washington this week for the final legislative sprint before the midterm elections. Lawmakers are trying to avoid a government shutdown and will review explosive sexual assault claims against President Trump’s second Supreme Court nominee.
With government funding set to run out on Sept. 30, the House will take up the Senate-passed spending bill that includes hundreds of billions of funding for the military and the Labor and Health and Human Services Departments.
The measure would also fund remaining agencies through Dec. 7, putting off debate over funding for the Department of Homeland Security — and the president's border wall — until after the midterm elections in November. Trump wants $5 billion in wall funding for 2019, while Democrats have only agreed to $1.6 billion.
While he signed a package of spending bills funding government agencies into law last week, Trump also criticized Republican leaders over Twitter, urging them to "finally get tough” in spending negotiations.
Trump’s public venting over wall funding has raised the specter of another partial government shutdown, though Republican leaders have privately urged him not to hold up spending bills ahead of the midterms.
The House will also take up a bill to reauthorize the Federal Aviation Administration, which includes $1.68 billion in funding for Hurricane Florence recovery efforts.
Over the weekend, congressional officials and lawyers for the woman who claimed Supreme Court nominee Brett Kavanaugh sexually assaulted her decades ago reached an agreement for her to testify before the Senate Judiciary Committee on Thursday.
Ahead of the committee’s planned vote on Kavanaugh’s nomination, Christine Blasey Ford came forward and accused Kavanaugh of assaulting her at a party in 1982, when they both attended high school in suburban Washington, D.C.
Committee members are still working out the final details but have decided not to invite or compel other witnesses requested by Ford’s legal team, including Mark Judge, a friend of Kavanaugh’s who Ford says witnessed the assault.
In a statement to the committee, Judge denied the allegations, saying that he had no knowledge of the party or improper conduct by Kavanaugh. Two other alleged witnesses have shared similar statements with the committee.
Democrats say they plan to ask Kavanaugh about the drinking culture at his exclusive private high school.
“There have been a lot of things said about the alcohol that was consumed by the judge as well as by others in his school,” Sen. Dick Durbin, D-Ill., said in an appearance on ABC’s “This Week with George Stephanopoulos.” “That has to be part of any relevant questioning.”
Sen. Lindsey Graham, R-S.C., said in an interview on “Fox News Sunday” that he wants to hear Ford’s account but suggested he was unlikely to change his mind on Kavanaugh’s nomination.
“Unless there's something more, no, I'm not going to ruin Judge Kavanaugh's life over this, but she should come forward. She should have her say. She will be respectfully treated,” he said.
It’s unclear when the committee and Senate could vote to advance Kavanaugh’s nomination and confirm him, and whether that would take place before the midterm elections, given that Congress is expected to be out of session next month.
Lawmakers also expressed interest in investigating reports that Deputy Attorney General Rod Rosenstein suggested that then-FBI Deputy Director Andrew McCabe wear a wire to record the president in a meeting. Rosenstein also allegedly tried to could convince Cabinet members to invoke the 25th Amendment to remove Trump from office.
In an interview with CBS News on Sunday, House Oversight Committee Chairman Trey Gowdy, R-S.C., inferred that lawmakers will seek memos written by McCabe on his conversations with Rosenstein.

Trump’s tax returns given to Manhattan prosecutors
Heavy snow across Rockies and Cascades, seasonable air returns to the Gulf Coast
Congress aims to avoid politics with independent Jan. 6 investigation
After racial unrest across US Congress takes another look at reparations
Washington state announces plan to expand COVID-19 vaccine accessibility for minorities
‘The Bachelor’ recap: Kit walks away as four other women eliminated ahead of hometown dates