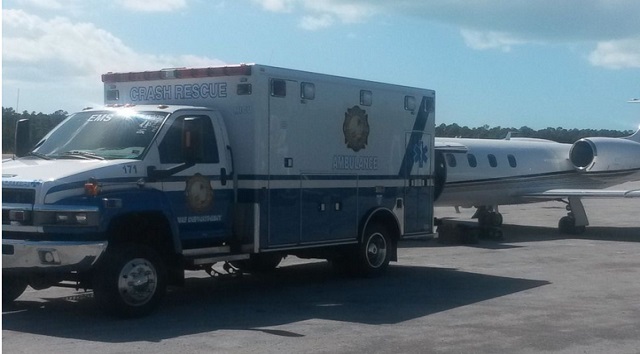 Abaco Fire Chief Colin Albury(ABACO ISLAND, Bahamas) — An American tourist suffered a severe injury when she was attacked by a shark while spearfishing in the Bahamas Sunday afternoon, according to authorities.
The unnamed Massachusetts native had “severe trauma” to her left hand, and was flown by air ambulance to a hospital in Florida.
“She isn’t mad at the shark because getting attacked is a common risk with spearfishing,” Abaco Fire Chief Colin Albury told ABC News.
According to Albury, the 32-year-old woman is an experienced spearfisher who has a vacation home in the Treasure Cay area of Abaco Island in the Bahamas.
The attack happened when she was swimming back to her boat with a speared fish. She was with three other people, but no one else was injured.
The victim is now being treated by a trauma surgeon at Memorial Hospital in Hollywood, Florida, authorities said.
According to Albury, this is the first shark attack in Treasure Cay this year.

Defense secretary says US still assessing who carried out Iraq rocket attack
California authorities identify those injured in deadly crash near US-Mexico border
‘I am an American, too’: Violence sparks new grief, reckoning for Asian Americans
Three dogs attack miniature pony, one dog shot and killed
Rise in anti-Asian American hate crimes may lead to mental health crisis
Biden says there will be enough vaccine for American adults by end of May