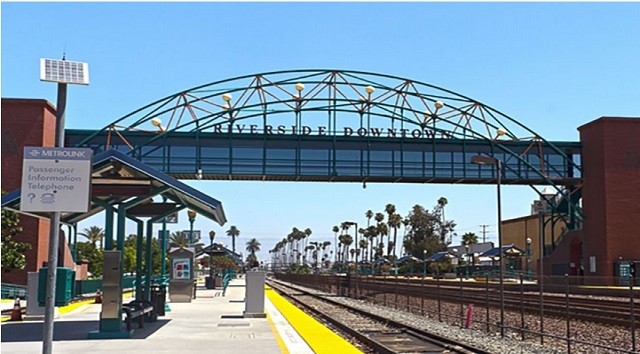 Southern California Regional Rail Authority(RIVERSIDE, Calif.) — A suspect has been detained for allegedly stabbing a man in the neck in an unprovoked attack at a Southern California Metrolink station, police said.
The suspect was caught on surveillance video at the time of the broad-daylight assault Sunday morning in Riverside, the Riverside Police Department said.
"After a brief verbal exchange," the knife-wielding suspect stabbed the 69-year-old man, police said. The suspect then fled the scene.
"He said, 'I've been hit. I've been hit.' He was holding his neck and I seen blood coming all down on his clothes," the victim's friend, Katrina, who had just dropped him off at the station, told ABC Los Angeles station KABC-TV.
"He was saying, 'I'm not going to make it… I'm not going to make it.' I said, 'Yes, you are Albert," she told KABC-TV.
The victim was hospitalized "in critical but stable condition," police said.
Riverside Police spokesman Ryan Railsback told ABC News Monday morning that a suspect has been detained. He declined to comment further.