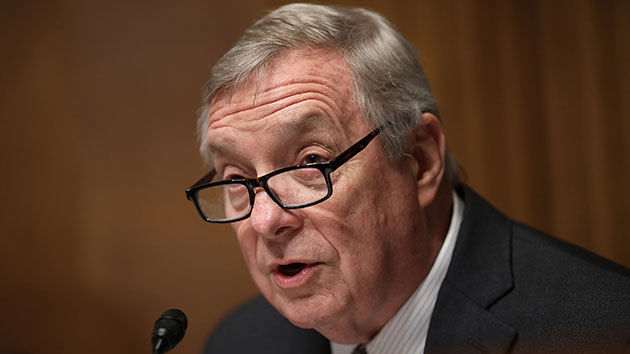 Win McNamee/Getty Images(WASHINGTON) — A top Democrat on the Senate Judiciary Committee said the woman accusing Supreme Court nominee Judge Brett Kavanaugh of sexual assault is "a credible witness" who has been subject to death threats since coming forward with her allegation.
“I think Dr. Ford has come forward understanding what she was going to face,” Sen. Dick Durbin, D-Ill., said of Christine Blasey Ford to ABC News Chief Anchor George Stephanopoulos on This Week Sunday. “I think it really speaks to her credibility at this moment. What in the hell did she have to gain by doing this?”
“At this point, she's faced death threats. Her family has been moved out of their home. They're worried about the safety of their children. They're worried about security at the hearing,” the Illinois senator said. “You know, when you take a look at this in honest terms, I believe that not only Judge Kavanaugh, but certainly Dr. Ford deserves a fair hearing.”
Ford's lawyers and the Republican leadership of the Judiciary Committee reached a tentative agreement Saturday evening for her and Kavanaugh to testify Thursday about her allegation, multiple sources familiar with the talks told ABC News. On This Week, Durbin said it could be either Wednesday or Thursday, adding, “At least that what I heard in a conference call last night.”
Ford alleges that Kavanaugh sexually assaulted her when they were both teenagers in the Maryland suburbs in the 1980s.
Kavanaugh has strongly denied the accusation as a "completely false allegation."
Copyright © 2018, ABC Radio. All rights reserved.

State budget meeting starts in PA Senate today
Biden will not have to cater to my agenda: Sen. Joe Manchin
‘The United States vs. Billie Holiday’, ‘The Queen’s Gambit’, George Clooney and more top AARP’s 2021 “Movies for Grownups” Awards
Baby born deaf reacts to hearing music for first time
A bipartisan coronavirus relief bill would be easier to pass: GOP Sen. Rob Portman
Vivek Murthy to talk about his own family lost to the pandemic in nomination hearing