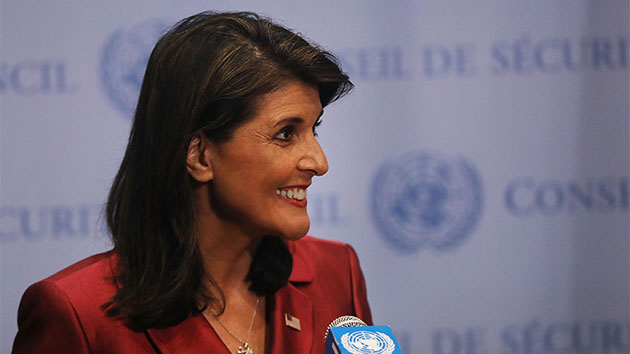 Spencer Platt/Getty Images(WASHINGTON) — U.S. Ambassador to the United Nations Nikki Haley said she has never heard anyone in President Donald Trump's Cabinet talk about the possibility of trying to remove him from office by means of the 25th Amendment.

Haley was responding to a question from ABC News Chief Anchor George Stephanopoulos on “This Week” Sunday in light of recent reports that Deputy Attorney General Rod Rosenstein suggested last year that he could recruit Cabinet members to invoke the 25th Amendment.

Rosenstein flatly denied the allegation, saying, "Any suggestion that I have ever advocated for the removal of the President is absolutely false.”

The 25th Amendment to the Constitution outlines a process by which the vice president and a majority of the Cabinet can declare a president “unable to discharge powers and duties of the office.”

Stephanopoulos asked Haley if she had “ever been part of any discussion on pursuing the 25th Amendment."

Haley responded, “I've never heard it. I don't think that's a reality at all among all of the Cabinet members. I've just never heard that. That’s absurd.”

"I’m telling you I'm [at the White House] almost every other week," she added. "And I can tell you never has anyone talked about the 25th Amendment. Never has anyone even questioned the president's mental stability.”

Haley also looked ahead to the United Nations General Assembly meeting this week in New York, at which Trump will speak.

Haley said Trump will talk about U.S. “success stories," including “the fact that we have almost defeated ISIS; the fact that we’re looking at North Korea, who’s now at the table talking;" and "the movement of the embassy in Jerusalem, or if you look at Syria and the progress that’s starting to be made there."

Stephanopoulos asked the U.N. ambassador about U.S. efforts toward getting North Korea to end its nuclear program.

The leaders of North and South Korea appear to both want the U.S. to take certain actions, such as officially declaring an end to the Korean War.

“The two Korean leaders… [seem] to be now demanding reciprocal steps of some kind from the United States,” Stephanopoulos said. “Is the United States prepared to do anything more now based on what we've seen from North Korea?”

“George, make no mistake, the reason they came to the table is because those sanctions are suffocating them and they want out,” Haley said. “And so we're not going to do anything to loosen those sanctions until we make sure that there is no more threat from North Korea.”

As to whether Trump might meet again with North Korean Chairman Kim Jong Un, Haley said she thinks Secretary of State Mike Pompeo "needs to have a couple more conversations" with North Korea first.

Trump is scheduled to chair a meeting of the U.N. Security Council on Wednesday on the topic of Iran and the broader issue of nuclear nonproliferation. In remarks Sept. 20 previewing the U.N. meeting, Haley joked that this would be “the most-watched Security Council meeting ever.”

Stephanopoulos asked on "This Week" about the possibility of Trump meeting with Iranian President Hassan Rouhani.

If the president's summit with Kim "seemed to bear fruit with North Korea, why not meet with the Iranian president?” Stephanopoulos asked.

Haley said Trump isn't opposed to meeting with Rouhani. “The Iranian president hasn't asked. If he asked, I think the president would strongly consider it,” she said.

But she added that Rouhani "has to stop all of his bad behavior before the president’s going to think he’s serious about wanting to talk.”

On NBC's “Meet the Press” Sunday morning, Pompeo said that the possibility of a meeting between Trump and Rouhani at the United Nations session isn’t off the table.

“He’s happy to talk with folks at any time,” Pompeo said. “The president’s been pretty clear about that.”

Haley said that "a big part" of Trump’s message at the U.N. will be changes to the U.S. policy on foreign aid.=