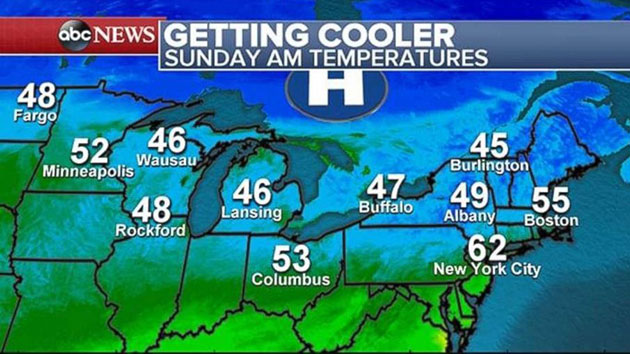 iStock/Thinkstock(NEW YORK) — Heavy rain stretches from eastern Texas all the way to New Jersey early Sunday as moisture interacts with a stationary front lingering in the southern U.S.
Heavy rain dropped nearly 5 inches of rain in western Virginia and eastern West Virginia overnight, causing numerous reports of flash flooding in the region.
Flood alerts are still in effect Sunday for parts of the Southern Plains and Ohio Valley.
Widespread strong thunderstorms with heavy rain will develop in much of the Mississippi River and Ohio valleys, eventually spreading into parts of the mid-Atlantic and Northeast by late Sunday and into Monday.
Locally, 3 to 5 inches of rain is expected in parts of the Mississippi River Valley through Tuesday, especially from Paducah, Kentucky, to Memphis, Tennessee. There is a chance of some flash flooding in the region through Monday night.
Parts of the I-70 corridor from Indianapolis to Pittsburgh could see 2 to 3 inches of rain. Localized flash flooding is possible there.
On Tuesday, a cold front will finally kick a lot of this unsettled weather eastward, but it will first bring a chance for severe storms to parts of the Midwest. Damaging winds and large hail are the main threats.
Temperatures dipping
Meanwhile, north of the unsettled weather, the cooler air is beginning to spill into northern parts of the U.S. The jet stream is dipping south, allowing the coolest morning temperatures in four to five months for some areas. Low temperatures on Sunday morning will be in the 40s from North Dakota to Maine.
Temperatures will rebound over the next few days, but another shot of cool air is in the forecast for the end of the week in the Northern Plains and upper Midwest. There is a chance that some of that region could see below-freezing temperatures by the end of the week.
All of this is wonderfully on time with the arrival of astronomical fall.
No concern yet for Tropical Storm Kirk
There are still a number of areas that are being monitored in the Atlantic; however, none of them will have an immediate impact to land.
Tropical Storm Kirk, which formed Saturday, has winds of 40 mph and is moving west at 18 mph as of Sunday morning. The storm is located approximately 465 miles south-southwest of the Cabo Verde Islands. The storm will pick up speed over the next few days and likely will strengthen as it moves westward. However, by the middle and end of the week, Kirk will begin to weaken.
The current forecast track has Kirk reaching the Lesser Antilles late this week as a weakening tropical storm. However, there is a possibility that Kirk will not be able to maintain tropical organization before approaching the islands. Therefore, it remains uncertain if Kirk will bring any impact to land.
Copyright © 2018, ABC Radio. All rights reserved.