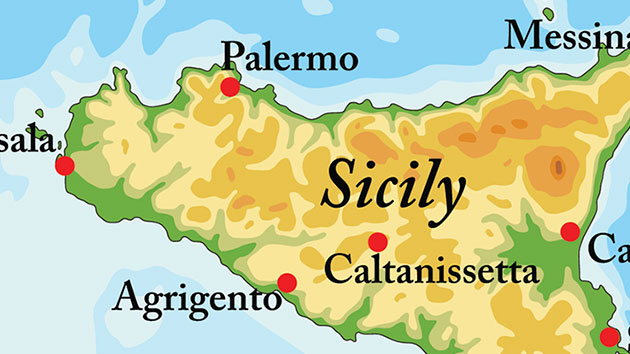 iStock/Thinkstock(PALMERO, Sicily) — In a small room in a former fortress in the port town of Palermo, Sicily, a video displayed across one of the walls depicts a nondescript stretch of highway. A closer look reveals four white marks on the ground — the outline of a truck — and faint, brownish stains.
This is a crime scene simulated in video by John Gerrard, an artist who visited the location two days after the bodies of 71 migrants from Iraq, Syria and Iran were found in the back of a refrigerated truck near Vienna in 2015. They had suffocated while journeying north after the driver forgot to turn on the ventilation. The driver subsequently fled the scene.
The deaths made headlines, but Gerrard’s video artfully adds a grim human element: a few marks, surely washed away by now, the only remnants of an incident where so many lives were lost.
Such works define the best of Manifesta 12, a nomadic European art biennial on display until Nov. 4 in Palermo, which prides itself for engaging with political and social issues. This year, many of the 40 works focus on the subjects of human movement and cohabitation. Pieces such as Gerrard’s offer powerful contemplations on the realities of migration, from the frequency of deadly Mediterranean crossings to the harsh lives Yazidi women have in Iraqi refugee camps.
It’s a prescient point in time for the festival to take place in Sicily, a Mediterranean crossroads that has been featured centrally in Europe’s migration debate in recent months. Italy’s new populist far-right coalition government came to power on an anti-migration platform and has gained popularity at home by refusing to allow Mediterranean rescue ships to dock in Italian ports.
In August, Deputy Prime Minister Matteo Salvini refused to let the Diciotti — a rescue boat with more than 100 migrants onboard — dock in the Sicilian port town of Catania. He later allowed the passengers to disembark, but not before being placed under formal investigation for possible illegal detention. The event fueled international outrage and further sparked the European Union's migration debate while boosting Salvini’s popularity in Italy.
Such debates are precisely what the exhibition's organizers aimed to comment on. “When Manifesta was founded, it was for investigating the changes after the fall of the Berlin wall,” explained curator Maria Chiara di Trapani. “It was started to study through art how society is changing in different ways around Europe.”
“Now, if you want to see what’s happening in the world when it comes to migration, the Mediterranean needs to be focused on,” she added.
A consistent landing point for migration over the centuries, Sicily was inhabited by the Greeks; Arabs; Normans; and, more recently, people from West Africa, Southeast Asia and the Middle East. A walk through the city reveals an architectural mélange of Greco, Moorish and Roman buildings. During World War II, allied troops heavily bombed the city to scare out Mussolini’s fascists. The damage left holes in the landscape, many of which were refilled by shoddy apartment blocks, while others were simply left empty.
Today, Palermo attracts an increasing number of tourists after having shed its mafia reputation, in large part thanks to its mayor, Leoluca Orlando, who took broad steps to clean up corruption. In 2018, the city was designated Italy’s capital of culture. Manifesta has helped to further launch the city into the international spotlight.
The biennial deftly makes use of various abandoned historical buildings, displaying works in everything from crypts to abandoned mansions that are in various states of decaying splendor. Even the city’s impressive botanical garden plays host to a variety of installations.
When discussing migration and the concept of physical borders, Palazzo Forcella De Seta, a former city fortification, is an apt setting for some of the biennial’s most powerful works.
A video installation titled Liquid Violence, by UK-based research group Forensic Oceanography, uses digital maps and charts to recreate Mediterranean water borders and convey specific cases where boats were abandoned, leaving their passengers to die.

Liquid Violence aims to visualize “the policies and practices of migrant boats being stranded at sea to defer them from crossing,” according to the organizers, who added that the works use images to show the EU and Italy’s decision in 2014 to cut back on search and rescue missions.
It is gruesomely timely in light of the UN Refugee Agency report released in September that highlighted the increasing number of deaths by those attempting to cross the central Mediterranean. One in 16 people died while crossing from Libya between January and July this year, compared to one in 42 during the same period in 2017, according to the report.
The Italian coast sees more migrant arrivals (119,369) than Greece (29,718) or Spain (22,103), according to 2017 United Nations High Commissioner for Refugees statistics. Most migrants stop only briefly in Italy, often living in prison-like reception centers on the city’s periphery while they wait for asylum requests to be processed.
This reality is the subject of a video piece in the mixed-media exhibit Signal Flow, organized by filmmaker Laura Poitras, who is best known for her work on the Edward Snowden documentary Citizenfour.
For Signal Flow, Poitras worked with local film students to create a series of works that touch on the U.S. military presence in Italy. The documentary focuses on the day-to-day lives of several people living in migrant holding centers, which were formerly a U.S. Army compound. The film depicts migrants slinging backpacks over barbed wire to climb in and out, meeting with smugglers to discuss northward journeys and reading texts with Jehovah’s witnesses who are parked on the sides of streets.
The next edition of Manifesta will take place in another Mediterranean port town, Marseille, in 2020. Chances are that when it opens, the works on display will once again touch on immigration, which is all but certain to remain Europe’s most pressing issue.
Copyright © 2018, ABC Radio. All rights reserved.