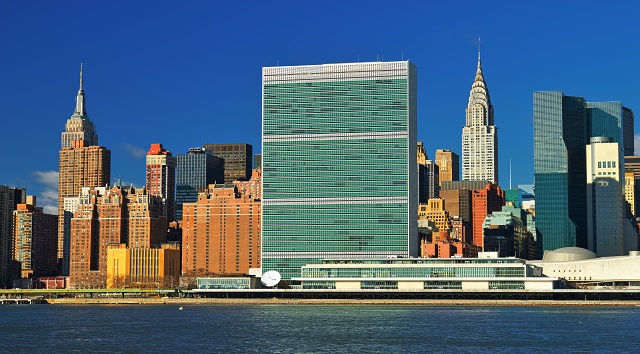 iStock/Thinkstock(NEW YORK) — President Trump joins dozens of world leaders in New York this week for the United Nations General Assembly, a jam-packed series of diplomatic meetings and speeches.
It's no longer Trump's first time at the U.N., so the questions of what kind of impact he'll have on this world stage have evaporated. But they've been replaced by what could be a dramatic week of jockeying in a world disrupted by Trump, with both American allies and adversaries scrambling to reshape relationships and fend for themselves.
It's also a world largely more peaceful, but torn apart in different regions by civil wars and ethnic violence, with humanitarian crises and the largest number of displaced people and refugees at any time in recent history. World leaders and international organizations will be pressed on how to address these challenges effectively, if they can.
Here are the top issues that will be on the agenda for the 73rd General Assembly.
WORKING WITH, AGAINST, OR AROUND TRUMP
Trump's "America First" foreign policy has reshaped many relationships across the globe, including some of the U.S.'s decades-old alliances.
While the demands Trump has made of NATO members to pay up have been a longstanding U.S. concern, his rhetoric towards those countries and his expressed doubts about the alliance's common defense have unnerved European allies. His treatment of friendly leaders like Canadian Prime Minister Justin Trudeau, who he has called "very dishonest and weak," and German Chancellor Angela Merkel, who he has criticized on everything from trade to immigration, has undermined America's relationships with those countries.
But it's also his policies that have opened divisions, in particular with western countries. Since last year's General Assembly, the withdrawal from the Iran nuclear deal, the cuts in aid to Palestinians and recognition of Jerusalem as Israel's capital, the tariffs on aluminum and steel, and most recently the threats to the International Criminal Court have been fiercely opposed by Europe and Canada.
"Other U.N. member states no longer look to the United States as a natural leader, or even a reliable partner," according to Stewart Patrick, a senior fellow at the Council on Foreign Relations who served in the George W. Bush administration. "They have tired of Trump's my-way-or-the-highway act and are increasingly hitting the road — or looking to China to fill the vacuum left by the U.S. retreat."
That doesn't necessarily mean Trump will be unwelcome at the U.N., analysts say — just maneuvered around.
"It's very unlikely to see many people confronting President Trump. You are likely to see many people thinking of ways to undermine President Trump because they think that the approach that the U.S. has articulated isn't going to take the world in the direction it needs to go," said Jon Alterman, a senior vice president at the Center for Strategic and International Studies who also served at the State Department under Bush.
For example, French President Emmanuel Macron and Japanese Prime Minister Shinzo Abe are meeting with Iranian President Hassan Rouhani despite Trump's calls to isolate Iran. After failing to keep Trump in the nuclear deal, they are still looking for ways to salvage the accord and engage Iran diplomatically and economically, even as U.S. sanctions loom.

NORTH KOREA AND IRAN'S NEXT MOVES
Iran is clearly on the president's mind as he heads into the week, tweeting Friday that he would chair a special U.N. Security Council meeting about the country, even though the administration says it will actually be broadly focused on nonproliferation. A draft concept note for the meeting obtained by ABC News makes no direct mention of Iran, saying the meeting instead will be about how "to counter the spread and use of the world's most dangerous weapons."
That's something that the U.S. and its allies no longer agree on entirely. As Security Council permanent members, France and the United Kingdom will be in the meeting, but along with Germany, they continue to support the Iran nuclear deal as the best way to prevent Iran from obtaining a nuclear weapon. Trump withdrew from the agreement in May and has begun an economic pressure campaign to drive Iran to the negotiating table again.
On the world stage in New York, Rouhani will have the opportunity to fire back at the Trump administration and keep Europe from withdrawing their business from the country.
The other critical proliferation challenge is North Korea, and the General Assembly will be key for taking next steps in the diplomatic initiative underway. One week after his historic summit with Kim Jong Un in North Korea, South Korean President Moon Jae-in will meet with Trump and share a personal message from Kim.
Moon will be pushing Trump to sign a declaration to officially end the Korean War, something the U.S. has said it will not do until North Korea takes steps to denuclearize. Figuring out that sequencing will be a top priority for all sides to see if there is a way forward.
To that end, Secretary Pompeo has also offered to meet with North Korean Foreign Minister Ri Yong Ho during the week as he prepares to head back to Pyongyang to revive negotiations. The North Koreans have not yet accepted that invitation.

A WORLD OF HUMANITARIAN CRISES
The world's attention will also be focused on trying to solve several humanitarian crises, from Myanmar to Yemen and Syria to South Sudan — each the focus of at least one major meeting.
In particular, there could be diplomatic momentum on Syria after Russia and Turkey negotiated a truce to halt an offensive by Syrian dictator Bashar al Assad into Idlib, the last rebel stronghold. Pompeo recently named Amb. Jim Jeffrey, an experienced diplomat, as the new Special Representative for Syria Negotiations, and he and U.N. Special Envoy for Syria Staffan de Mistura will have meetings in New York amid a push to revive the peace process in Geneva.
The U.N. has so far taken few concrete steps to pressure Myanmar over its slaughter and expulsion of Rohingya, a Muslim-majority ethnic group. But after it released a detailed fact-finding report that called for Myanmar leadership to be prosecuted for genocide, there could be movement. There will also be discussions about the nearly 1 million Rohingya refugees in Bangladesh, which is straining under that enormous need and seeking more funding to help care for them and an agreement to ultimately repatriate them to Myanmar.
But the world's worst humanitarian crisis is in Yemen, and there will be several meetings to coordinate the response to the horrors on the ground — famine, a cholera outbreak, and displacement, let alone the violent war. After the U.N. Special Envoy Martin Griffiths tried to convene a peace meeting but failed to get the Houthi rebels to attend, it's unclear where the diplomatic push stands.
A worldwide crisis, the drug addiction epidemic will also be addressed, with Trump hosting a special meeting called "Global Call to Action on the World Drug Problem." One hundred twenty-four countries have already signed up to support the agenda, according to the Associated Press.
Copyright © 2018, ABC Radio. All rights reserved.