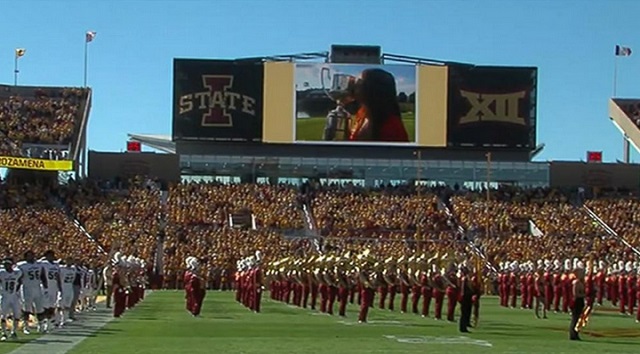 ABC News(DES MOINES) — On most game days, the stands filled with fans for the Iowa State Cyclones football team are a riotous mix of colors.
But on Saturday morning, all you could see was a sea of solemn yellow, a tribute to a beloved star golfer who was killed earlier this week.
Celia Barquin Arozamena, recently named Iowa State’s female athlete of the year, was found dead with stab wounds in a pond on a golf course on Monday. Hours later, a man, who according to court documents, has a criminal background who had purportedly made statements recently "to the effect of having an urge to rape and kill a woman," according to court documents, was charged with her murder.
The 22-year-old golfer was a native of Spain and her murder sent shockwaves from the nation's heartland to her hometown of Reocín, Spain, which held three days of mourning and condemned the "vile act" that took her life.
At the Cyclones' game on Saturday, fans and supporters wore yellow — Barquin Arozamena's favorite color and a symbol of her Spanish roots. Cheerleaders wore yellow ribbons in their hair and players on the field wore yellow wristbands. Many wore a sticker with the letters 'CBA' — Barquin Arozamena's initials — on their T-shirts.
A video tribute played on a giant screen, the band used a formation that spelled out her initials, both teams wore a decal on their helmets in her memory, and players, cheerleaders and fans — all 60,000 of them — observed a moment of silence before the national anthem was played.
Barquin, the Cyclones’ first conference champion in 25 years, was finishing up her degree at Iowa State and working toward her ultimate goal of becoming a professional golfer.
"It's just a horrific, horrific senseless death," Iowa Gov. Kim Reynolds told reporters Tuesday.
Reynolds' statement was echoed by Iowa State head women's golf coach Christie Martens.
"We are all devastated," Martens said in a statement.
"Celia was a beautiful person who was loved by all her teammates and friends. She loved Iowa State and was an outstanding representative for our school. We will never forget her competitive drive to be the best and her passion for life."
Copyright © 2018, ABC Radio. All rights reserved.