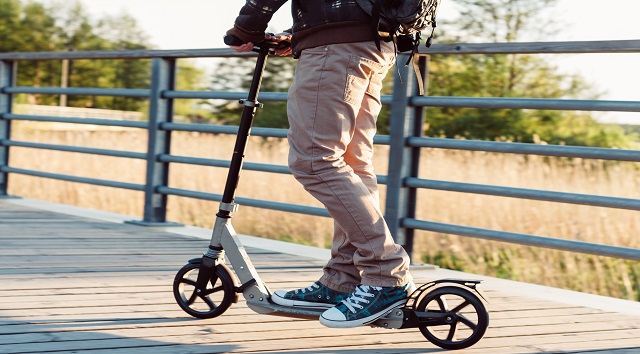 iStock/Thinkstock(INDIANAPOLIS) — Indianapolis police are searching for a burglar suspected of stealing items from inside a home and using a Bird electric scooter to leave the scene of the crime.
Michael Leppert said he was getting ready at home on Tuesday morning when he heard what sounded like footsteps coming from the first floor. He yelled to check who was there, but when he didn't get a response, he assumed it was either his wife or dog, he said. When he went downstairs, however, he found that his wallet, laptop and backpack were missing.
There were no signs of forced entry, Leppert told ABC News, adding that the burglar must have entered through the back door, which was unlocked.
While he waited for officers to arrive, Leppert said he spoke to his neighbor, who saw a man riding an electric scooter outside of his home at the time of the burglary.
Bird, an electric scooter rental company that requires users to download an app on their phone and link their credit card, sent the following statement to ABC News:
“We do not condone criminal behavior regardless of the mode of transportation that is used to commit the crime. When any type of irresponsible or criminal behavior is associated with someone on a Bird, we encourage people to report this behavior to us to investigate. Bird investigates each report and takes appropriate next steps, which can include removing individuals from the platform. We are currently investigating the situation, and fully cooperating with local authorities during this process.”
Copyright © 2018, ABC Radio. All rights reserved.