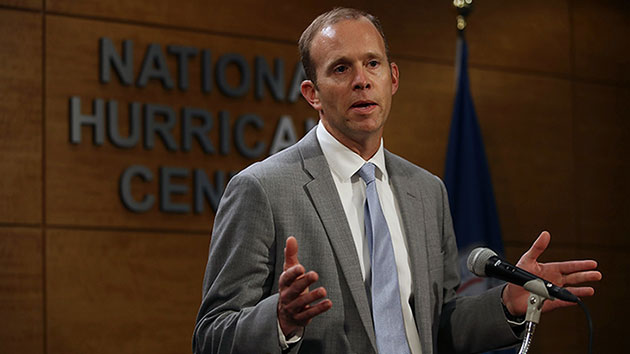 Joe Raedle/Getty Images(NEW YORK) — Federal Emergency Management Agency Administrator Brock Long used government-owned vehicles without proper authorization, but will reimburse the government and not be fired, Homeland Security Secretary Kirstjen Nielsen said in a statement late Friday.
The statement ends days of speculation over whether the FEMA chief would be ousted.
Just as the agency's response to Hurricane Florence got underway, reports surfaced that the administrator was under investigation by the Department of Homeland Security's inspector general. Those findings were delivered to Congress late Friday, but not released publicly.
At issue was Long's use of government vehicles to commute home to his family in Hickory, North Carolina.
According to Nielsen's statement, use of government vehicles was "established practice" by FEMA administrators for "more than a decade to ensure senior leader connectivity in times of crisis."
But this practice posed a problem for Nielsen because Long would use the vehicles to commute home to his family in Hickory — at least a six-hour drive from the nation's capital.
"Despite this established practice, use of government vehicles to provide home-to-work transportation for the FEMA administrator was never authorized in accordance with applicable law," Nielsen wrote.
She added that she takes "seriously" the "unauthorized or inappropriate use of government resources" and has discussed "next steps" with Long.
"We had a productive conversation where we discussed my expectations regarding the agency’s use of government vehicles going forward," she said. "The administrator acknowledged that mistakes were made, and he took personal responsibility."
In a statement attached to Nielsen's comments, Long said, "As the leader of this agency, I accept full responsibility for any mistakes that were made by me or the agency. The secretary and I are taking corrective action to prevent such mistakes from happening in the future."
Long's job security was in jeopardy even as Hurricane Florence approached North Carolina, The Wall Street Journal reported last week. Separately, the Washington Post reported Thursday that Long considered stepping down over the scandal and sparring with Nielsen, who decided to visit North Carolina without telling Long.
Long bumbled his response to a question about FEMA's preparedness for Florence at a press conference before the storm, calling the storm by the incorrect name: "I am 100 percent focused on Floyd at this moment."
"I would never intentionally run a program incorrectly," Long said at the press conference. "Bottom line is, if we made mistakes on the way a program was run, then we'll work with the [Office of Inspector General] to get those corrected."
Copyright © 2018, ABC Radio. All rights reserved.

Texas governor on ending mask order: ‘We no longer need government running our lives’
What to know about FEMA vaccination sites amid COVID-19 pandemic
DHS to combat domestic violent extremism with $77 million from FEMA
Why 2021 is shaping up to be a pivotal year for electric vehicles
Biden’s push for electric vehicles puts US in international race to electrify
Twitter to expand labels on government accounts, state-affiliated media in transparency bid