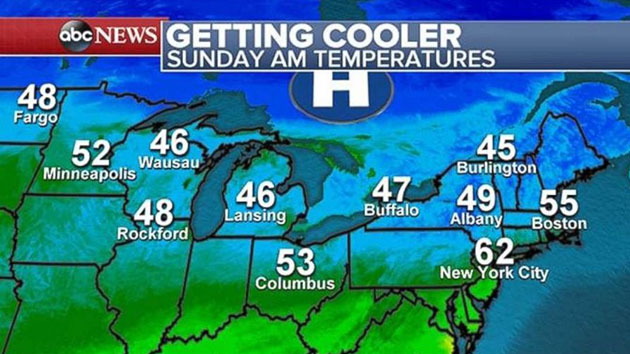 ABC News(NEW YORK) — A cold front brought severe storms from Ohio to upstate New York on Friday as the Northeast and Midwest brace for cooler temperatures on the first day of fall.
Over 50 reports of severe weather were received on Friday, including near Cleveland and Buffalo, New York. Just north of the border, the same system caused a tornado near Ottawa, Ontario, that injured over two dozen people, according to the Toronto Star.
Strong storms brought torrential rain to northern Texas early Saturday, with significant flash flooding reported in the Dallas metro area. Radar estimates showed 3 to 5 inches of rain have fallen locally in the region.
The threat of flash flooding continues Saturday morning in parts of the Southern Plains. Storms could have rainfall rates of 1 to 2 inches per hour. They will slowly drift to the east, spreading into the Mississippi River Valley by Saturday night and into Sunday.
Several rounds of strong storms with torrential rain will bring more flash flooding from Texas to Kentucky. Locally, 2 to 4 inches of rain are expected through Monday for this region.
Sign of the times
The arctic is beginning to get colder again as the Northern Hemisphere loses direct sunlight hours in the transition from summer to winter. The first widespread and noteworthy signs of a change of seasons are beginning to appear across much of the northern half of the country.
Fall will officially arrive at 9:54 p.m. on Saturday.
A shot of cooler air is moving into the Northern Plains and Midwest on Saturday. Low temperatures Saturday morning from North Dakota to northern Illinois will be in the 40s. The cooler air will expand and slide eastward on Sunday with 40-degree temperatures likely across much of interior New England.
For many from the Midwest to the Northeast, Sunday morning will be the first time in months they will need to break out a light jacket.
Temperatures will rebound in the early part of next week; however, the longer-term forecast trends indicate that a prolonged period of below-average temperatures is on the way to the central U.S.
Copyright © 2018, ABC Radio. All rights reserved.