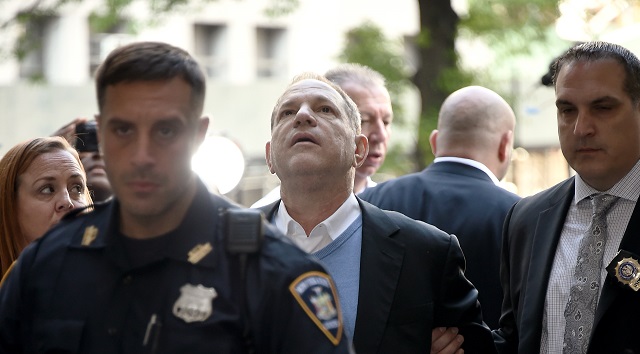 Steven Ferdman/Getty Images(NEW YORK) — The last time we heard Ambra Gutierrez’s voice was on a recording she made at the behest of the New York City Police Department during an encounter with Harvey Weinstein.
She had already gone to police alleging that the movie mogul had sexually assaulted her during a meeting.
“You sit there and have a drink,” Weinstein appeared to say on a recording obtained by The New Yorker.
“I don’t want to,” Gutierrez can be heard replying.
“You touched my breast,” she's heard telling him.
“Oh, come on, I’m used to that,” Weinstein allegedly said.
That was 2015. Police presented the case to the Manhattan District Attorney’s office, which ultimately declined to prosecute.
"Our best lawyers looked at the case,” Mr. Vance said, speaking to reporters after an event at John Jay College of Criminal Justice in Manhattan. “I, like they, was very disturbed by the contents of the tape. It’s obviously sickening. But at the end of the day we operate in a courtroom of law, not the court of public opinion, and our sex crime prosecutors made a determination that this was not going to be a provable case.”
She spent the last three years in a self-described “exile” but emerged as the #MeToo movement that she helped fuel marks its anniversary.
“The #MeToo movement is for changing the future,” Gutierrez told ABC News in an interview. “Telling your story is huge. I admire women who had the strength to do it. But, if you can, you should also go to the police, file a lawsuit, or do anything to help prevent it from happening again to you or someone else.”
After her criminal case was rejected, Gutierrez says she retreated to the Philippines to be with family while she battled depression, shame and international smear campaigns.
Now 25, the Filipina-Italian model has returned to New York to work on a new Univision podcast, “In Our Words,” which focuses on overcoming adversity.
“My name is Ambra Gutierrez and I was sexually assaulted … No one believed me … I couldn’t believe this was happening. I was forced into exile and it forever changed my life. But now, I’m back and stronger than ever,” she introduces herself in the first episode.
“I’m trying to give voice to other people, to provide a safe platform. Some of my guests came and spoke about how they were sexually assaulted,” she told ABC News, emphasizing that she also has guests on to talk about the positive changes they made.
She cited her interview with American model Sara Ziff, who founded Model Alliance, to promote fair treatment, equal opportunity and more sustainable practices in the fashion industry.
Gutierrez’s alleged sexual assault became public almost a year ago when Ronan Farrow’s New Yorker article featured the stories of multiple women accusing then film mogul Harvey Weinstein of sexual assault and harassment.
Farrow's reporting in the magazine was also supported with the 2015recording obtained from a New York Police Department sting operation involving Weinstein and Gutierrez. It revealed Weinstein admitting to groping the then-22-year-old model, describing it as behavior he is “used to.”
Lurid articles about Gutierrez soon appeared in the tabloids, depicting her as a blackmailer and an opportunist.
After the D.A.’s office decided not to press charges, Gutierrez "signed a highly restrictive nondisclosure agreement" with Weinstein, including "an affidavit stating that the acts Weinstein admits to in the recording never happened," in exchange for a payment, according to the New Yorker.
Gutierrez, haunted by the tabloid smear campaign, left the country for three years.
“I lived in the Philippines and in Italy and decided to come back to New York, my favorite city in the world,” she said.
Empowered by Gutierrez as well as even more high-profile accusers, including Ashley Judd, Rose McGowan and Gwyneth Paltrow, women began to speak out publicly about the abuse they say they have personally endured, leading to the attention now being paid to the #MeToo movement.
Gutierrez emphasized it is not only the stories of the accusers but also the accused.
“I interviewed a male journalist accused of sexual misconduct. He lost his job and his career. His story … has to be heard.
“I am on the side of justice,” she said.
Though Weinstein now faces criminal charges stemming from allegations by several women, he has pleaded not guilty.
Beyond her initial involvement with the Weinstein allegations, Gutierrez is pursuing justice in another matter.
Gutierrez was the finalist for the title of Miss Italy and her agent brought her to one of former Italian Prime Minister Silvio Berlusconi’s infamous "bunga bunga" sex parties. She said she refused to stay and, despite being threatened, escaped and took her friend, another young Italian model, Chiara Danese, with her.
Gutierrez later testified against Berlusconi in court, but he was ultimately acquitted. Berlusconi was sent to trial on charges that he paid to have sex with a Moroccan dancer Karima El Mahroug, who allegedly participated in “bunga-bunga” parties when she was underage and was paid for sex.
He was convicted in 2013, but won an appeal the next year.
El Mahroug admitted in court to receiving payments from Berlusconi, but both denied having sex. Berlusconi has also maintained that the get-togethers were not sex parties, but elegant parties.
Even the actor George Clooney was dragged into the trial but he denied having attended any of the alleged sex parties. Unlike Clooney, Gutierrez was vilified by the Italian press and called a liar and an escort.
She says her work there helped her battle her depression and her suicidal thoughts.
“In the Philippines, what kept me alive was helping charities that helped children, like Humanility. Seeing them have so little and create so much was inspiring,” she said.
As a survivor, Gutierrez believes her podcast will inspire men and women to share their stories and bring about societal change.
“We should not be scared to share,” Gutierrez said.
Copyright © 2018, ABC Radio. All rights reserved.