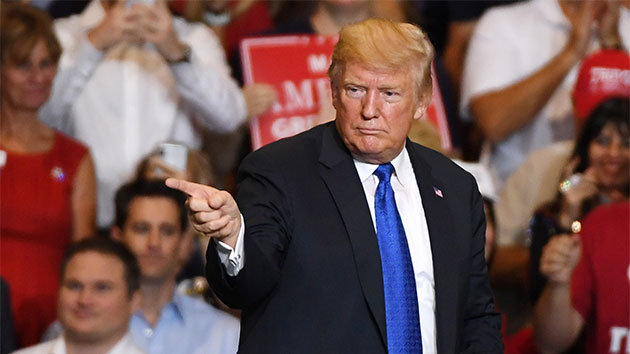 Ethan Miller/Getty Images(NEW YORK) — Following news Friday that Deputy Attorney General Rod Rosenstein suggested in 2017 that officials in the FBI should wear a wire when speaking with President Trump, the president told a rally in Missouri that he hopes soon to get rid of a "lingering stench" in the Department of Justice and FBI.

"Look what's being exposed at the Department of Justice and the FBI," Trump told a packed house in Springfield, Mo. Friday night. "You have some real bad ones. You see what's happening at the FBI — they’re all gone, they’re all gone. But there’s a lingering stench and we’re going to get rid of that too."

The comments follow reporting confirmed by ABC News citing sources familiar with memos by former FBI Deputy Director Andrew McCabe – which allege that Rosenstein told McCabe he could recruit members of the president’s cabinet to invoke the 25th Amendment to remove President Trump from office for being unfit. Rosenstein believed he would be able to convince Attorney General Jeff Sessions and then-Homeland Security Secretary John Kelly to sign on, according to the sources.

The president made the remarks at an event on behalf of U.S. Senate candidate Josh Hawley, who is locked in a tight battle with Democratic Sen. Claire McCaskill in a state Trump won in the 2016 presidential election by 19 points.

"Missouri was never too close to call," Trump joked as he began recounting his signature reflection of election night.

After trashing McCaskill for her recent announcement that she won’t support the nomination of Judge Brett Kavanaugh, Trump tied the result of the midterms directly to his presidency.

Speaking of Kavanaugh, Trump didn’t directly make reference to Dr. Christine Blasey Ford who has accused Kavanaugh of attempting to sexually assault her while the two were in high school. Trump instead expressed confidence that Kavanaugh would be confirmed.

“You talk about central casting, he was born for the U.S. Supreme Court. And it’s gonna happen,” Trump said. “We have to fight for him, not worry about the other side, and by the way, women are for that more than anybody would understand."

The president hit on a myriad of other topics in his campaign speech, including immigration, the economy, and the militant leftist group ‘Antifa.’

“You have guys that look like they live with mom and dad in the basement,” Trump said of Antifa. "I would never suggest this, but I will tell you, oy, they’re so lucky that we’re peaceful.”

Trump also trashed the “Democrat party,” saying he chooses the name over “Democratic Party” because “why should I make it sound so sweet?”

"They aren't just extremist," Trump said. “They are dangerous, and frankly, crazy."