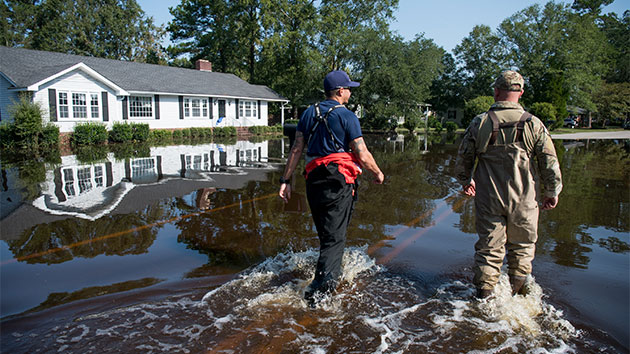 Sean Rayford/Getty Images(NEW YORK) — Sara Felton and her husband packed up their car and got out of the path of Hurricane Florence two days before the storm hit. Now, a week after the impact, they’re dealing with the aftermath.

The North Carolina resident got a call from her mother-in-law the morning after the worst of the storm, saying she had driven past their trailer and the “windows were blown out and [the] shed was flipped over.”

Felton, 28, and her husband “hauled butt” to get back home after staying with friends who were more inland. But even the journey back was treacherous.

“The rain was coming down so hard that you couldn’t really see,” she said of their ride back to Beaufort, North Carolina. “The current was dragging our car but I could still see the roads a little bit.”

She told her husband Riley to keep going. When they arrived home, the destruction was obvious.

“I’ve never seen my husband cry before and he was just in tears,” she said. “Everything was under water.”

They had to walk in ankle-deep mud and marshland to get into the trailer. The windows were blown out, the ceiling in the living room had collapsed. The air conditioner “flew through the window and landed in the middle of the kitchen,” she noted.

“Our entire deck — it’s like it just got lifted up and the sky just swallowed it… there's not even a piece of wood nowhere,” she said.

Felton said when she went to her daughter’s bedroom, “we could just feel the floors, it was about to collapse. We couldn’t even step into the room.”

“Our whole entire place was just destroyed,” she said.

The Feltons are like so many others who are rebuilding their lives in the wake of Florence, which made landfall as a hurricane before being downgrading to a tropical storm. The damage from the impact was one threat but the days of continued rain and flooding had disastrous implications as well.

The Feltons have accepted that they'll need to find a new home.

“It’s a complete loss. The only thing we could really save were some clothes that we had in the dresser. They were all soaking wet but that's something you can throw in the washer machine,” said Felton, who works at two convenience stores in the Beaufort area.

She said that for now, she, her husband, her 10-year-old daughter and their two pit bulls will likely be moving in temporarily with her mother-in-law who has a spare bedroom.

Felton said that they’ve contacted FEMA and “they even said [their trailer] was unlivable.” She hopes to get some kind of assistance.

“We both work – we can pay our own stuff – but we just need to get our foot in the front door,” she said of receiving some form of aid.

She continued, “We think that everything happens for a reason. The lord … he's telling us something. He got us out of there for a reason. We're moving on, we're excited about the future. We'll see what happens.”

#MeToo, Time’s Up and National Women’s Law Center launch campaign for Black survivors of sexual violence
CPAC to put 2020 election claims center stage just weeks after Capitol attack
Wreckage of TWA Flight 800 to be destroyed 25 years after crash
And Just Like That… Chris Noth hints Mr. Big could be heading to the ‘Sex and the City’ reboot
‘And Just Like That…’ Mr. Big will not appear in ‘Sex and the City’ reboot
US says it will ‘respond’ to Iraq missile attack that injured Americans at ‘time and place of our choosing’