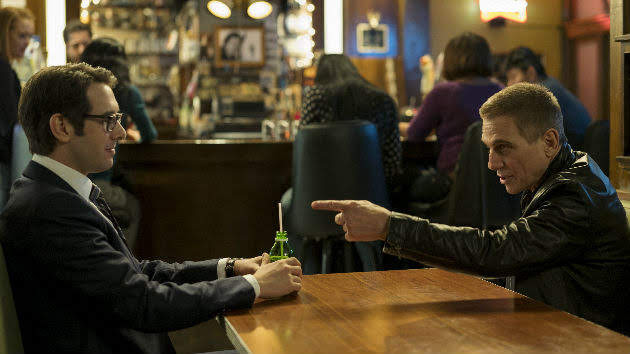 Netflix(NEW YORK) — Josh Groban's new album Bridges is out today — and so is his new Netflix sitcom, The Good Cop. It stars Josh as a by-the-book police lieutenant who clashes with his ex-con dirty cop of a dad, played by Tony Danza.

Josh says the offer to star in the show came out of nowhere, and he just couldn't turn it down.

"I was reached out to by Andy Breckman, who created the show and previously wrote and created Monk," Josh tells ABC Radio. "I got a letter…from him saying, "I think you're right for this part. "[He said] this was something he'd thought of while he was writing the script."

"I mean, every amazing kind of life-changing thing that's happened to me has been an unexpected door and a fork in the road that's opened up and you just gotta walk through it, y'know?" Josh adds. "And so I said yes!"

Part of the appeal was that Josh's Good Cop role was far removed from the character he'd been playing in the Broadway musical Natasha, Pierre and the Great Comet of 1912.

"It's not often as an actor to get a chance to go so 180 within the same two-year period," he notes. And the Netflix factor helped seal the deal, he says.

"Timing was an issue," he explains. "If this had been a network…26-episode thing, I would have had to say no. So the fact that it's a 10-episode series — each hour is its own mystery and this team of misfits solving these crimes — was great."

"I also just happened to like the way Netflix operates," Josh adds. "…The way that they provide content to their subscribers is so forward-thinking…and they're putting the passion behind it."

‘Pharmacy deserts’ are new front in the race to vaccinate for COVID-19
A year of COVID-19: What was going on in the US in March 2020
Rep. Swalwell sues Trump over alleged role in Capitol assault
Kelly Marie Tran on recording ‘Raya and the Last Dragon’ from home, and the movie’s “delicious” melting pot
What to know about traveling this summer amid the pandemic
After he was called slur on the court, Jeremy Lin highlights surge in anti-Asian hate