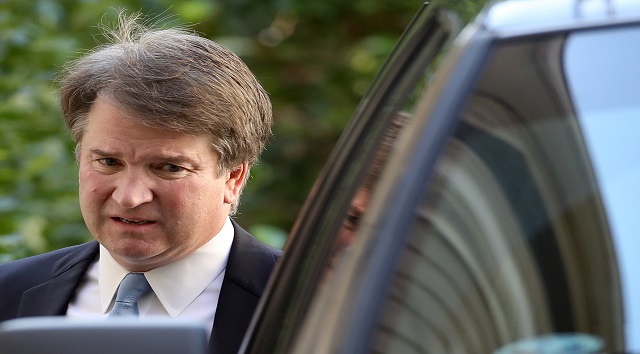 Win McNamee/Getty Images(WASHINGTON) — The sister-in-law of Christine Blasey Ford, the college professor who's accused Supreme Court nominee Brett Kavanaugh of sexually assaulting her as teenagers, said on Good Morning America that "I don't see any possibility" that Ford is mistaken.
Deborah Ford Peters said Ford is down to earth, hardworking and honest.
Peters also said that since the accusation against Kavanaugh, which he's denied, Ford has received death threats.
Ford spoke out, writing a letter to Sen. Diane Feinstein in July, Peters said, because "I assume that she was very concerned about Judge Kavanaugh being considered for the Supreme Court."
"I think she doesn't want her story misrepresented, in the way that it was leaked," Peters added, "but I think she also strongly believes that story needs to be heard by that American public, that they need to know what this man did in his youth so that he is held responsible."
Peters met Ford in 2002 shortly before Ford married her brother.
"She's quite gregarious and quite a good listener — and kind of the family glue I would say," Peters recalled.
Some Republicans have suggested Ford's accusation against Kavanaugh could be a case of mistaken identity.
"I can't imagine any reason that it would be mistaken identity," Peters said. "Specifically working with people who have been through traumas, the details of the traumas are often etched in their minds forever."
Peters said she hasn't yet had a chance to sit down with Ford and discuss the specific incident in clinical detail, but "people who experience sexual assaults that are as scary as this one seems to be, according to her story, can suffer shame, fear, depression, anxiety. It can inhibit them socially, professionally. So I don't know which of those things she's carried with her, but I'm sure it's carried some scars."
Overall, Peters added, she's proud of her sister-in-law for coming forward in the first place.
"I feel very proud of her and kind of impressed and amazed that she has the courage to come out and face whatever consequences she has to face," Peters said. "But she's a strong person. She's showing us she's capable of doing it."

Peters is a psychologist who works in private practice in California.