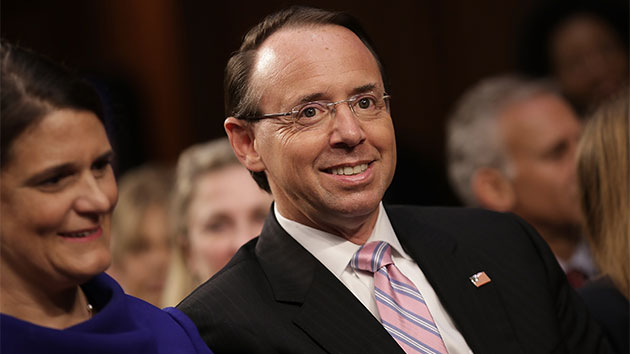 (WASHINGTON) — At a May 2017 meeting between Deputy Attorney General Rod Rosenstein and then-acting FBI Director Andrew McCabe, a week after President Trump had fired James Comey as director, Rosenstein suggested that McCabe or others wear a wire when speaking with the president, according to memos McCabe made of the conversation, sources familiar with them told ABC News.

Additionally, sources tell ABC News that, according to the memos, Rosenstein told McCabe he could recruit members of the president’s Cabinet to invoke the 25th Amendment to remove Trump from office for being unfit. Rosenstein believed he would be able to persuade Attorney General Jeff Sessions and then-Homeland Security Secretary John Kelly to sign on, according to the sources.

The White House, as of Friday evening, had not commented specifically on the story.

But Trump, speaking at a rally in Springfield, Missouri, once again attacked his Justice Department.

"Look what's being exposed at the Department of Justice and the FBI," the president told a packed house Friday night. "You have some real bad ones. You see what's happening at the FBI — they’re all gone, they’re all gone. But there’s a lingering stench and we’re going to get rid of that too."

Rosenstein issued a second statement not long after the president spoke.

“I never pursued or authorized recording the President and any suggestion that I have ever advocated for the removal of the President is absolutely false," Rosenstein said.

The May 2017 meeting was one of two attended by Rosenstein and McCabe, sources said.

The second meeting, later in the day, had more people present, they said, including other senior Justice Department officials and then-FBI attorney Lisa Page. In this meeting, Rosenstein again raised the idea of putting a wire on someone to record Trump, the sources said. Some in the room left the meeting believing he was joking about the wire idea, but McCabe and Page left the room thinking otherwise, according to the sources.

McCabe and Page both wrote their own notes about the meetings, and while Page's notes also mention Rosenstein bringing up the idea of putting a wire on someone to record Trump, Page's notes do not reflect any suggestion that Rosenstein was joking, according to one source familiar with the matter.

The source familiar with the matter, who quoted Rosenstein responding to McCabe, also points out that Lisa Page took more detailed notes in the meeting and apparently does not mention that the 25th Amendment came up.

However, another source familiar with how the Justice Department officials who attended that later meeting viewed what happened, said their belief was that Rosenstein was being "sarcastic" — noting that there was never any follow-up conversation from Rosenstein or anyone else about it.

This source said that the meeting was essentially just a discussion about the events the week before and everything facing DOJ in the wake of Comey's firing. “It was a difficult time for [the DOJ and FBI]." "Nobody was angry or acting out" in the meeting, but "it was just sort of intense. It was a very intense time," the source said.

The source said Rosenstein's comment about the wire "was a comment borne out of frustration.” It was "a throw-away, sarcastic line that was perhaps in some way a challenge to" the FBI's view of investigating a president. “No one from Justice took it in the least bit seriously," the source said of Rosenstein's wire comment. From the Justice officials' perspective, Rosenstein's comment was "a recognition to the people involved in this thing: How would you go about this investigation?”

Nevertheless, this source said it was unclear even to those in the meeting how McCabe interpreted Rosenstein's comment. “I don’t know what Andy thought. He keeps his cards close,” the source said.

In his initial statement Friday afternoon, Rosenstein pushed back on the New York Times report but did not flatly deny it.

“The New York Times’s story is inaccurate and factually incorrect. I will not further comment on a story based on anonymous sources who are obviously biased against the department and are advancing their own personal agenda. But let me be clear about this: Based on my personal dealings with the president, there is no basis to invoke the 25th Amendment.”

In response to the story, McCabe’s attorney’s issued the following statement to ABC News: "Andrew McCabe drafted memos to memorialize significant discussions he had with high-level officials and preserved them so he would have an accurate, contemporaneous record of those discussions. When he was interviewed by the Special Counsel more than a year ago, he gave all of his memos – classified and unclassified – to the Special Counsel's office. A set of those memos remained at the FBI at the time of his departure in late January 2018. He has no knowledge of how any member of the media obtained those memos."

After Comey's firing, ABC News reported that Rosenstein was so upset with the White House for pinning Comey’s dismissal on him that he was on the verge of resigning.

Rosenstein remained on the job and a week later assigned Robert Mueller as special counsel to "oversee the previously-confirmed FBI investigation of Russian government efforts to influence the 2016 presidential election and related matters."

In the months since Mueller’s appointment, Rosenstein has been responsible for overseeing the Russia probe, often holding press conferences to announce indictments brought by Mueller’s team of prosecutors. Rosenstein’s leading role in the Russia probe came as a result of Attorney General Jeff Sessions’ recusal from all matters related to the presidential campaign to avoid conflicts of interest.

On Capitol Hill, Republicans have targeted Rosenstein in their criticism of the Justice Department’s handling of the Russia probe. In July, 11 House Republicans introduced articles of impeachment against Rosenstein and accused the Justice Department of hiding investigative information from Congress, abusing the Federal Intelligence Surveillance Act, and failing to comply with subpoenas.

Senate Democratic Leader Chuck Schumer said in a statement: “This story must not be used as a pretext for the corrupt purpose of firing Deputy Attorney General Rosenstein in order to install an official who will allow the president to interfere with the Special Counsel’s investigation. Generals Kelly, Mattis and numerous other White House and cabinet officials have been reported to say critical things of the president without being fired.”