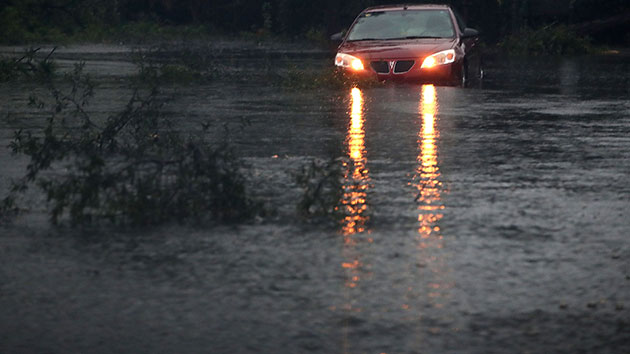 Mark Wilson/Getty Images(WILMINGTON, N.C.) — Duke Energy says a dam at a power plant in Wilmington, North Carolina has been breached, raising concerns that water contaminated with byproducts of burning coal could flow into the Cape Fear River.

Duke says ponds that store solid byproducts of burning coal that can contaminate waterways with substances like mercury and arsenic, known as coal ash, are submerged but they believe stable and not releasing ash into the river.

But a spokeswoman also said they cannot rule out that coal ash was released and will continue to monitor the situation.

Duke says flooding at the Sutton Power Plant in Wilmington caused breaches in a dam on a lake to store water for cooling the facility and that the water is overflowing into the Cape Fear River. The water from the cooling lake also overflowed into a natural gas plant, which has been shut down.

The company says another byproduct of burning coal- hollow spheres of silica or aluminum called cenospheres – are flowing into the river. A spokeswoman said they don't yet know how many of the spheres were released.

But Lisa Evans, a senior attorney specializing in hazardous waste for the environmental law firm Earthjustice, said cenospheres are part of coal ash and that its unlikely that part of coal byproducts would spill but not other potentially harmful substances.

She said Earthjustice is concerned the floodwaters have risen above the level of the coal ash ponds which means any water in the lake and flowing into the river could also be contaminated.

"What we're concerned about is that the floodwaters of the Cape Fear have raised the level of the lake and thus breached or overtopped the dike flooding the ash pond which causes the release of coal ash and cenospheres into the cooling pond or lake which is now being released into the Cape Fear," Evans said.

A wall around one of the coal ash basins is underwater but they believe the ash is still in place, Paige Sheehan, a spokeswoman for Duke said. She also said they are not aware of a public health risk associated with cenospheres.

The small, hollow spheres created as a byproduct of burning coal are used in manufacturing for plastics like kayaks and bowling balls.

The North Carolina Department of Environmental Quality said safety officials were notified of the breach Friday morning and that there are no structural issues with the dam. They said in a statement that water from the Cape Fear River was flowing into Sutton lake and then back into the river and that water was close to both coal ash basins on the property but there doesn't appear to be any structural issues.

"DEQ’s dam safety engineers are now coordinating with NCDOT to conduct drone inspections to determine real-time site conditions. While the state is currently in emergency response mode, a thorough investigation of events will soon follow to ensure that Duke Energy is held responsible for any environmental impacts caused by their coal ash facilities," the department said in a statement.

EPA Region 4 Administrator Trey Glenn said in a statement that EPA is monitoring the Sutton site and other sites around the state for potential impacts to the environment and human health.

The Cape Fear River is a source of drinking water in Wilmington, NC. The state has been looking into levels of a chemical used to make non-stick products in the water after it was released into the river last year, according to The News and Observer.