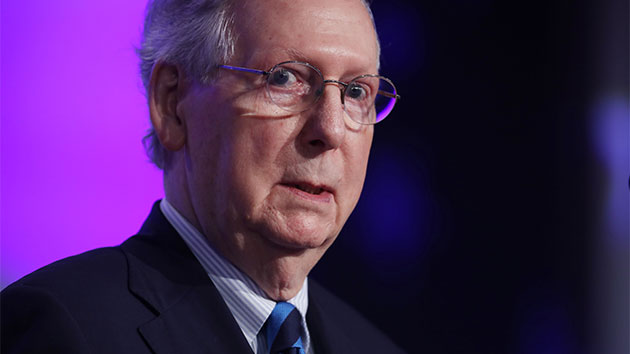 Chip Somodevilla/Getty Images(WASHINGTON) — The drama surrounding the sexual assault allegation against Judge Brett Kavanaugh, and the turmoil it's caused in his confirmation process, are nothing more than a political spectacle for many conservatives at the Value Voters Summit.

"I think he’s the right choice and what the Democrats have pulled, and the dirty tricks, is just appalling," a nine-time attendee of the annual summit, Russ Consentino of Bucks County, told ABC News Friday.

Just days before a Senate Judiciary Committee vote, scheduled for Thursday, that likely would have sent Kavanaugh’s nomination to the full Senate, word of a letter from California professor Christine Blasey Ford detailing the allegation that he drunkenly assaulted her at a house party when they were in high school — locking her in a bedroom, pinning her on a bed, groping her and covering her mouth with his hand to stop her from screaming — brought Kavanaugh’s confirmation process to a startling halt.

"You pull something out after 35, 36 years," Consentino said at the summit, echoing President Trump's tweet Friday morning asking why Ford didn't report the incident to the FBI or other authorities at the time. "She should’ve reported it to the police. What the Democrats are doing is all grandstanding. It’s a shame."

Kavanaugh has denied the allegation and said he would testify to that under oath. Blasey Ford is negotiating with Republican committee members about testifying publicly or privately. Both Republicans and Democrats say she be heard.

To a room filled with conservative evangelicals, Kavanaugh is a like-minded defender of their shared values.

"The people are fired up" about Kavanaugh and "believe he does" have the character to serve on the Supreme Court, according to attendee Roman Buhler of Virginia.

"It’s certainly a motivating issue for people," he added.

Speaker Kayla Kessinger, a Republican state delegate in West Virginia who is running for re-election primarily on a pro-life platform — in a state that is taking up a ballot initiative to revoke public funding of abortions in November — told ABC News: "I am absolutely, one hundred percent supportive of Brett Kavanaugh."

Asked if she believes Ford’s account, Kessinger responded, "I believe that something may have happened to this woman … but I don’t believe Brett Kavanaugh committed those allegations."

Housing and Urban Development Secretary Ben Carson defended Trump's pick for the Supreme Court by saying, "There are two sides to every story" before recalling when he was falsely accused, he said, of fathering a child by a Florida woman.

Another attendee, Nancy Seeger of Pennsylvania, called Kavanaugh "a perfectly qualified candidate" and branded Democrats' actions regarding Ford as "suspicious."

"We’re in this circus," she told ABC News. "We want people who are constitutional and will govern in good faith … If it’s true, and it happened, she is now being used as a political pawn. They put her in this position at the eleventh hour. Democrats are using her as a political pawn."

The summit's emcee, Gil Mertz of the Family Research Council, questioned Democrats' intentions by comparing the allegation against Kavanaugh to the accusations of physical abuse against Democratic National Committee Deputy Chair Keith Ellison, who is running for attorney general in Minnesota.

"Where is Karen Monahan’s support," he asked, referring to Ellison's former girlfriend who has alleged the abuse that he's denied. "Where are the Democratic calls for an FBI investigation for Keith Ellison?"

The summit, a gathering of conservatives who support "traditional marriage, religious liberty, sanctity of life and limited government," comes nearly seven weeks ahead of the midterm elections, which will decide control of the House and Senate.

Republicans are defending their majority in the House and aiming to hold on to their slim advantage in the Senate.

The stakes could not be higher this November for both parties, but for Republicans, Kavanaugh’s confirmation is a key concern among conservative voters.

The election, she said, "will decide whether the golden time goes on or whether in fact, we’re in very, very different territory that we’ve never seen before. That will be determined in seven weeks."

The prospect of conservative values shared across all three branches has sparked urgency among Republicans to turn out voters.

Senate Republican Leader McConnell suggested that the battle for that future lies in the courts.

Securing judicial appointments including Kavanaugh to the highest court in the land, will help protect "pro-family, opportunity policies," he said to a standing ovation.

Despite the furor over Kavanaugh’s nomination, McConnell boasted confidence, telling the audience: "Keep the faith. Don’t get rattled by all of this. We’re going to plow right through it and do our job."

"In the very near future, Judge Kavanaugh will be on the United States Supreme Court," he said firmly.