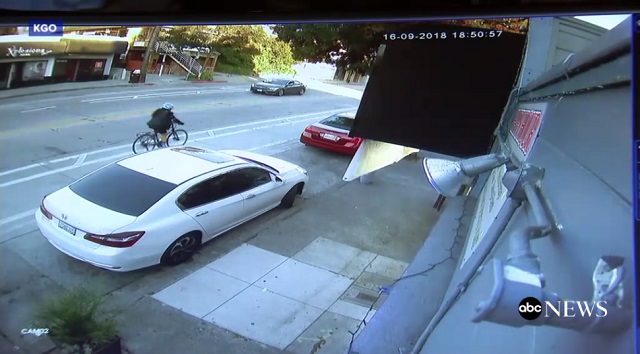 KGO/ABC News(OAKLAND, Calif.) — A 24-year-old woman who says she was shot by a man using a paintball gun hesitated at first to call the police because she claimed she was worried officers might mistake his paintball gun for the real thing and fatally shoot him.
The victim, who does not want to be identified, was riding her bike in Oakland, California, on Sunday night when she says she was shot at close range from a car with two men inside.
"I looked up and saw a kid leaning out of a car window shooting at me," she said. "It looked kind of like a machine gun."
A surveillance video showed the woman riding a bike at 6:50 p.m., and, then, 24 seconds later the footage revealed there was a white vehicle following behind her. The woman confirmed to ABC station KGO-TV that the car in the video belonged to the shooter.
The two men, who she said appeared to be in their late teens or early 20s, were inside the white car when she said the man shot her without saying a word.
"I looked down and I had paint and blood on my leg and had been hit a few times on my back," she said.
When she realized she was going to be fine, she hesitated at first to call the police.
"It looked like they were young people carrying a big gun that could have easily been seen as a real gun," she said.
She says she called Oakland Police on Sunday night but was not able to reach the department. KGO-TV was told by Oakland police that the department would like to investigate the incident.