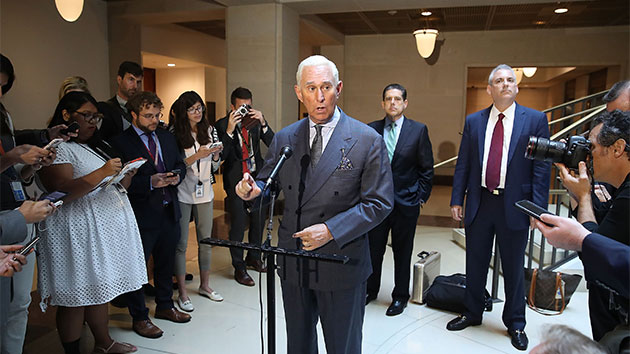 Stone is a longtime and close ally of President Donald Trump who has been under increasing scrutiny from the special counsel investigation.

Jerome Corsi, who until recently served as the Washington, D.C., bureau chief for the controversial far-right news outlet Infowars, is one of at least 11 individuals associated with Stone who have been contacted by the special counsel.

Corsi had been summoned to testify in Mueller's probe Sept. 7, but his appearance was canceled the night before, his attorney, David Gray told ABC News at the time.

Corsi, who stoked such false rumors as President Barack Obama not being born in the U.S., joined Infowars last year but has since departed. Corsi has been acquainted with Stone – who currently serves as a key contributor to Infowars – for years.

Stone has been under scrutiny from the special counsel in part because of statements he made in August 2016 which political opponents allege showed he knew that WikiLeaks was going to leak damaging information on former secretary of state and Democratic presidential nominee Hillary Clinton before it was released. Stone has been targeted because he communicated with Guccifer 2.0, the unnamed hacker group that has taken credit for breaking into Democratic National Committee email servers, sources told ABC News.

Corsi's name surfaced earlier this year after investigators with Mueller's team spent almost an hour interviewing Theodore Roosevelt "Ted" Malloch, 65, an American academic and conservative London-based author, discussing his ties to Stone, Corsi, and WikiLeaks, according to a post-script for Malloch's latest book.

Malloch told ABC News in April that the questioning occurred in March after Malloch was detained by federal agents at Boston's Logan Airport upon arrival from his home in London.

Malloch's pro-Trump political book, "The Plot to Destroy Trump: How the Deep State Fabricated the Russian Dossier to Subvert the President," describes the encounter as “intimidating.” In the post-script of his book, Malloch describes the interview and says agents seemed particularly interested in his connections with Stone, WikiLeaks, and Corsi. He described Corsi as a Trump campaign a journalist who edited a memoir he wrote years ago.

Mueller's interest in Stone and WikiLeaks goes to the heart of the U.S. intelligence community’s conclusion, released in a report in January 2017, that WikiLeaks weaponized and published damaging information on Clinton provided to it by a hacker from the Russian government.

“We assess with high confidence that Russian military intelligence (general main intelligence directorate or GRU) used Guccifer 2.0 and DCLeaks.com to release U.S. victim data obtained in cyber operations publicly and in exclusives to media outlets and relayed material to Wikileaks,” the intelligence report states. “Assange has denied receiving the trove of hacked information from the Russians. U.S. intelligence does not believe him.”

Stone has told ABC News multiple times that he had never met or spoken with Assange.

In addition to Corsi, individuals tied to Stone who have been contacted by the special counsel include former Trump campaign aides Michael Caputo and Sam Nunberg; Kristin Davis, the one-time “Manhattan Madam” who has worked for Stone and remains close to him; Stone's former driver and assistant, John Kakanis; Stone's one-time social media adviser, Jason Sullivan, and former Stone aide Andrew Miller.